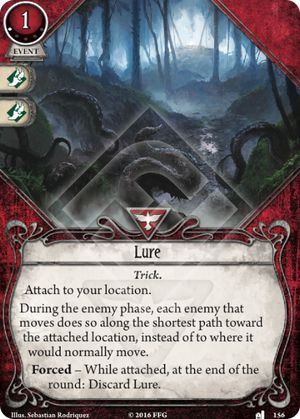 One of the most difficult events in the game to actually use. It only does anything if there are enemies that move during the enemy phase on the board (usually this would only be non-exhausted Hunter enemies.) Most of the time there won't be any such enemies, but if there are, then you can try to get them moving in the direction you want by attaching Lure to a location. But the fact that you have to be at that location yourself makes this a very rare situation. You can't just direct enemies to the opposite side of the map because, well, that's not where you are. You have to pull them to a location you're at, which is pretty much where Hunter enemies move anyway.

You also have to spend an action to play Lure! This is very inconvenient and makes it much more difficult to e.g. move to an out-of-the-way location, play Lure, and then get out of there before the enemies come. I guess Elusive would be helpful here but that is a seriously janky combo. Even if everything goes just right, you're only affecting enemy movement for one turn. And bear in mind that in multiplayer it's often possible to manipulate Hunter movement just through clever positioning, without needing cards like this.

Now, Lure does have a nice pair of agility icons, which helps compensate somewhat for how incredibly difficult it is to play. But given that it costs an XP, that's probably not going to be enough to entice people to actually run this. If Lure were Fast, and/or 0 XP, and/or caused enemies that don't have Hunter to move, and/or stayed in play until the enemies reached its location (instead of always disappearing after only one round), any or all these things might make it an attractive card. As is... not so much.

CaiusDrewart · 2515
This card would be pretty bomb if you could attach it to _any_ location. And why not? Hiding Spot does, and it doesn't eat up an XP. — bricklebrite · 332 2/27/18
Lure with it's current restrictions is rather useless. If you could play it anywhere or it would only be discarded if an enemy was at that location, it'd be playable. Maybe we'll see such an upgrade some day. — Django · 3742 2/28/18
Maybe some day we'll have a parallel Luke who can take all of the "attach to your location" cards and place them with his Gate Box. — Zinjanthropus · 178 11/26/20