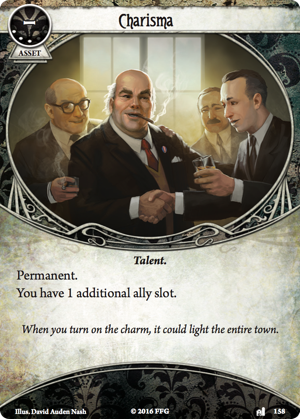 One of the single best upgrades you can buy for your deck. The ally slot is arguably the strongest slot available to investigators and being able to have two or even three allies out at the same time will dramatically change how you build decks.

There are allies so good that building decks that don't play them is unthinkable if those allies are available, such as Leo De Luca for Rogues or Dr. Milan Christopher for Seekers. Playing Charisma allows you to look at the other allies available to these investigators and consider including them as well.

Even better though is the health and sanity buffer that your allies provide you with. Having three allies out at the same time makes you virtually unkillable to any non-direct damage/horror. I would always consider getting Charisma and playing an extra ally before picking up something like Bulletproof Vest or Elder Sign Amulet if you are worried about trauma.

menionleah · 73
In addition to horror/damage soak, almost every ally gives you some supplemental passive ability or ability boost. For the vast majority of scenarios, that will always outweigh the additional +2 horror or damage soak that the 4 capacity vest/amulet provide. — AdamMal4444 · 7 3/15/21