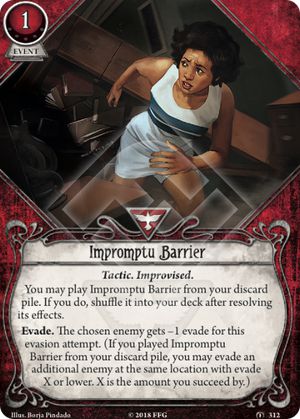 The long awaited final event in the Improvised cycle is here! And... its a little underwhelming?

In theory the advantage of the improvised cards is twofold: one they provide a "skill-bonus" in the form of a test difficulty reduction, and secondly they provide action compression when played from the discard by allowing you to double the action (gathering two clues for Winging It and dealing two damage for Improvised Weapon).

Impromptu Barrier does fine at providing a skill bonus, though there are very few evade 1 enemies and so you are pretty unlikely to get the "guaranteed success" that difficulty reduction can sometimes provide. A resource and a card to get effectively a +1 to two evade tests is probably a bit worse than the same rate on investigating and roughly the same as that rate on combat, purely based on how frequently tests come up. So on that front barrier isn't too much worse than the other improvised cards.

Where the card really falters for me is in the second effect. Doubling up on a combat test is frequently valuable, Improvised Weapon allows you to deal with a three health enemy in two actions, or split its effects and deal with a 1 health enemy and a two health enemy at one action each. Winging It lets you double the most important action in the game, working like a survivor version of Deduction. Doubling up on a successful evade action is simply less valuable than either damage or investigation as rather than requiring a two clue location or two health enemy (both very common even in solo) it requires you to have two enemies at your location, and for you to want to evade both of them.

If this card simply let you evade a second enemy at your location without the X or lower requirement, I think it would be niche but playable in investigators who like to evade a lot and can struggle to deal with multiple hunters. As is, not only do you have to want to evade two enemies at the same location but you also have to over-succeed by enough to evade both of them, otherwise the card essentially does nothing and you wasted your resource.

It's a real shame since I feel the other two are really home run designs and it would be nice to have a solid third to round out the set but, but I feel this falls more than a little flat.

birdfriender · 195
Well, one of the 1 Evade enemies is Nightgaunt, so it can be worth it for that. — Katsue · 8 12/29/18
The additional effect is worded like that of cunning distraction, and that means the additional enemy at your location can be even an enemy engaged to another investigator or an aloof enemy. Being able to evade enemies that are not engeged with you is a lot more valuable. It means that this card potentially compresses 3 actions instead of just 2. — Killbray · 54 5/2/19
0

I am trying this card out in an evasion-focused Finn deck in multiplayer TFA (normal mode). It seems to be pulling its weight. This card seems a little easier to fit into decks than Improvised Weapon because most characters that will fight will want to trigger their Fight actions from an asset instead of from Improvised Weapon. You typically don't have an equivalent asset for evasions, unless you're using Stealth, which most players find only useful in solo mode.

The card also somewhat fits into "succeed by X" archetypes (in combination with Finn and Pickpocketing, etc.). Daring Maneuver paired with this card can help you occasionally evade another baddy and avoid annoying Alert keywords. It's not a mindblowing combo but can be helpful at lower XP.