Return to The Devourer Below

Perform the setup as indicated in the Night of the Zealot Campaign Guide, with the following exceptions:
- When gathering encounter sets, also gather the new encounter sets for Return to The Devourer Below shown here.
- When choosing 4 Arkham Woods locations to put into play at random, include the 4 new Arkham Woods locations included in this encounter set, for a total of 10 possibilities.
- After setting the Umôrdhoth enemy aside, flip this card over and attach it to Umôrdhoth. 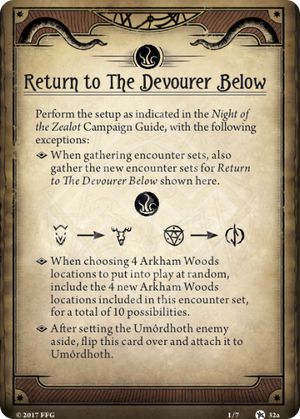 Vault of Earthly Demise cannot leave play.
Umôrdhoth gets +X health per investigator and gets +X fight, where X is the number of resources on this card.
Forced - When Umôrdhoth enters play, place 1 resource on this card for each act remaining in the act deck. 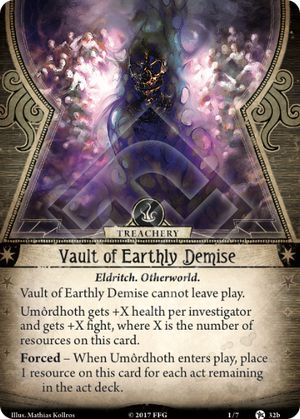 I have expend all the morning fighting Umordoth in the Vault of Earthly Demise. We wanted to play the Return to the Night of the Zealot without sacrificing Lita Chandler in hard mode. 2 players. We arrived to the conclusion that the Vault is a card too powerful that makes this impossible. We need more characters or an easiest difficulty. But even with more dakka increasing the combat stat of Umordoth seems a bit unbalanced. Maybe we can fight once or two times against a 6-8 combat stat, but to defeat it we need many combat rounds. Is impossible to sustain many fights againts these numbers. So basically my review of this card is that we need to read the text as: "Kill Lita Chandler, don't even try to challange me, you weak humans." Has been fun though.

Matamagos · 4
Or maybe the point is that you actually have to go for R1? R2 is famously easy in the original scenario! Have a plan; R1 is possible! — Death by Chocolate · 946 10/12/20
R2 is also possible in the "Return to", but you need to build your deck specifically for this one task. One cheesy strategy is to play Renfield and amass ridiculous amounts of resources (since you don't really care about doom in this scenario after Umordoth already appears, you can gain lots and lots of resources with Renfield). Then use these resources to boost your skill values in order to successfully attack. Supplement this with some testless damage options and some soak/damage and horror cancellation to stay alive long enough and it is possible to beat this 8/20 (given two players) stat monstrosity. — PowLee · 10 10/12/20
I did it with Tony in Hard last week. There is a deck for it. I took Dynamite, Marksmanship, Dodge and his Colts with a lot of ammo cards. It would have been a lot easier if Ursula hadn't perished since she had the Bow and Blood-Rite. Tony had to do all 18 damage. The deck name is - Tony Morgan - The Devourer Meets Its Match. — TWWaterfalls · 781 10/13/20
You could advance the act to reduce the vault's bonus. Or spend a few XP as guardian to get cheap fight boosts, like ace of sword, 2x reliable. Also take 1-2 beat cop and/or grete (2x charisma). With base fight 4, you should have around 10 combat as most XP weapons grant +2 or more. — Django · 3742 10/14/20