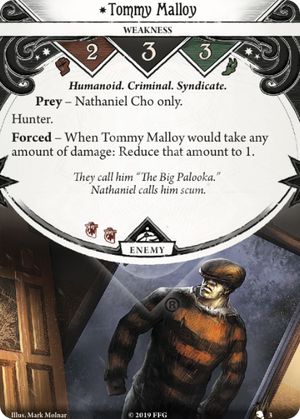 Another enemy signature weakness. Looking at the two elements, the effect and the discard condition, we get:

The effect: Easy to hit, hard to damage, hard for Nathaniel to Evade, hits pretty hard. Normally, this is 3 actions to clear, although you can speed things up with Beat Cop, Counterpunch, or Survival Knife (probably with Bandolier). Guard Dog can also help. Handcuffs shenanigans are also a possibility. This card will pretty much cost you a turn, one way or another, but is rarely a danger to either the scenario or campaign.

The discard condition: Kill Tommy or put the cuffs on him; your choice.

All in all, this is an average signature weakness.

Why should you take Handcuffs just to handle Tommy? From a naive action-cost perspective it doesn't seem to make sense: you just spent 2 resources, a card, and an action to save yourself 2 actions, in a class that isn't known for having an excess of resources. Effectively you're playing a Swift Reflexes, which isn't even a particularly good card on Rogues, much less Guardians.

But there are three important reasons why you would do this. Firstly, Cho will almost certainly draw through his deck every scenario, meaning that there's a good chance of seeing Tommy twice if not for Handcuffs. Secondly, you only need to pass a single test, not 3, which is particularly important at higher difficulties. Thirdly, it means you can draw safely during your turn. Since it usually will takes 3 actions to clear Tommy (baring Beat Cop (2), Dogs, and One-Two Punch), it'll feel terrible taking a draw action and find Tommy while trying to refill your hand. Banking an action with Handcuffs will save you from being smacked around by Tommy for a turn, or deal with him easily if he's drawn by an Overpower or Glory.

suika · 8634
also handcuffs lets you spend actions on non critical turns to save actions on critical turns, and having them around for when annoying cultists spawn ain't bad either. If you ever find yourself playing with trish handcuffs are an amazingly good card to combo with her. — Zerogrim · 248 4/1/21
Don't forget that you can support your clever with scene of crime and interrogate during every scenario — Tharzax · 1 4/1/21
On Cho specifically though, despite the synergy with Handcuffs I'd actually advise against Scene of the Crime/Interrogate, or more generally anything that doesn't contribute towards defeating monsters or keeping Cho alive. Deck space is a precious commidity for Cho, and those cards can gum up your Fight event engines. — suika · 8634 4/1/21
Also, your second handcuffs can help get rid of other terrible monsters, deep one bull, yig's snake men, the goatmen from the core set. A lot of scenarios have horrible non elite humanoids who it's very nice to just completely shut down — NarkasisBroon · 9 4/1/21
@Narkasis took the words right out of my mouth. If I wasn't already glad enough to take Handcuffs for when Tommy showed up, Deep One Bull made me sure it was the right decision. — Pinchers · 99 4/2/21
I took this card as Nathaniel to help against Tommy (for all the reasons suika mentions in the review), and I was impressed by how useful the card was outside of that. Permanently locking down an enemy is no joke for a level 0 card. The up-front cost gets less painful once you have a Stick to the Plan/Ever Vigilant setup going, too. — CaiusDrewart · 2738 4/3/21
One correction. You spend 2 resources, a card and TWO actions, to save yourself ONE action. You need one action to play Handcuffs, and another action to activate its ability. — Killbray · 4156 8/17/21
You would have needed 3 actions to defeat Tommy normally, so you saved 2 actions in the future. I counted the action to play Handcuffs as part of the "cost" to gain 2 actions in the future. — suika · 8634 10/7/21
1

If we consider a weakness' strength based on how many actions it takes to get rid of, Tommy Malloy is pretty harsh. His ability basically requires your team to spend three actions, minimum, to off him, which is more than most weaknesses.

There's also very few ways to mitigate the action sink, especially at level 0: you can use one-two punch to get 2 damage in one action, but you just played an event that normally does 4 damage for 2. The other option is Beat Cop, who you'd rather keep around as long as possible. Combine both and you can do it in one action, but you just spent six resources, static +1 combat, some soak and your most damaging event to remove a weakness. I'd rather just blow a whole turn taking basic fight actions, since Tommy's crummy fight stat makes him easy to hit.

In multiplayer someone could evade him, but solo that's really not an option. Even then, someone has to deal with him eventually, eating up your team's actions.

In short, he's really annoying, and will probably take three or more actions to get rid of. At least you can play Glory when you kill him.

SGPrometheus · 640
Or bring some Handcuffs so you can deal with him in 2 actions (and not shuffle him back in when you draw through your deck. Then drag him around for Scene of the Crime or Interrogate. Or better yet, hand the cuffed thug to the newly spoiled Trish. — Death by Chocolate · 1170 9/4/20
We’ve been waiting a long time to finally get a Guardian with a humanoid weakness enemy, so don’t complain too much! :) — Death by Chocolate · 1170 9/4/20
May be a few actions but you also get a draw, with upgraded boxing gloves that nine cards you get to look through. So he pays off more the further you go in a campaign with him. And if you have Trish... — MrGoldbee · 1243 9/4/20
It’s a bit dubious to say he helps Nathaniel by being an enemy. Presumably, as Nathan, you would have killed a different enemy that turn to activate gloves. — StyxTBeuford · 12720 9/4/20
You can use him to put tokens on Relentless, if that floats your boat. There are a ton of weaknesses that take 2 actions to clear; three actions is annoying, but it doesn't hold Nathaniel back that much, plus you can use cards (One-Two Punch as noted above or maybe Counterpunch) or other resources (Beat Cop). Malloy is certainly not in the ranks of the worst weaknesses. — LivefromBenefitSt · 907 9/15/20
I thought relentless only got tokens from extra damage you deal? How does that work? Aside from that, it's true he's not in the stable of weaknesses that will flat-out kill your investigator, like Cover Up, but he's still damn annoying. Another interesting tidbit is that his prey is only Nathaniel, so he actually won't bother other investigators if they're around. — SGPrometheus · 640 11/20/20
I think the Handcuffs suggestion is the best one. Handcuffs are good anyway, but they’re much easier to take when you can lock your weakness out of your deck using them. — StyxTBeuford · 12720 6/10/21