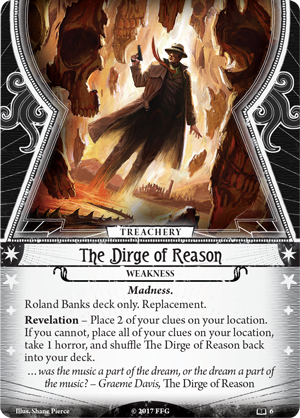 Much more manageable weakness than Cover Up. Yes, it can hurt multiple times during the scenario, but playing Roland, one should account for horror damage anyway and with cheap allies(Art Student, horror healing (Logical Reasoning and other horror soaks it is not that bad. I'm going to use this weakness by default along with complementary signature card - Mysteries Remain.

Zuntir · 560
Agreed. Note that if you keep two clues in reserve it also doesnt shuffle back and becomes just a small tempo loss comparable to random basic weaknesses. Even if the clues land on high shroud locations, Roland is good at testless clue gathering. — The_Wall · 240 3/25/18
1

This has been updated to match my "Signature Weakness Project." I have done my best to make sure that the original content isn't altered too much, out of respect for any comments.

One of the "shuffle this back into your deck" signature weaknesses. Looking at the two elements, the effect and the discard condition, we get:

The effect: Put 2 of Roland's clues on his location. If you don't have 2 clues, place what you can, take 1 horror, and shuffle the back into your deck to dirge you again. Obviously, this is no fun, but Roland generally doesn't mind dropping clues, since can scoop them up again by Investigate or Fight actions. The "horror and reshuffle" is pretty nasty to Roland with his sad 5 Sanity, but, if you are running Roland, you should be packing horror healing (e.g. Logical Reasoning or Hallowed Mirror), so you should have answers, but getting defeated by horror is a credible threat, especially if you can't or won't hoard clues. This is definitely a lighter weakness than Cover Up, in that it can only possibly give you 1 mental trauma, but it does have a weird synergy with Roland's "box" signature weakness, so he may be the best investigator to run both sets of signatures.

For those who don't read the comments: Dirge can't take clues off of Cover Up, since they aren't "Roland's Clues." It can, however, get unspent clues off of Roland, so he can Investigate to get them, clearing Cover Up in the process. It's pretty inefficient (it could take 5+ actions with a bad hand and bad luck), but it beats the pants off a mental trauma or two....

The discard condition: Have 2 clues when you draw this, otherwise you get hurt, and it shuffles back in your deck.

All in all, this is an average signature weakness, maybe above average if you are in a horror-heavy campaign like Carcosa.

Box vs book If you are afraid of Trauma, stick with the "book" signature set, but, if you a e more daring, the "book" set actually helps with the problems of the "box" signatures, so maybe take both.

LivefromBenefitSt · 779
I think you're implying that you can take the clues from Cover Up and dump them on your location if you draw this; that is not the case. You don't control the clues on Cover Up and they're not "your clues." If the synergy you refer to is this putting clues out on a formerly clueless board, that makes more sense, and I apologize for the misunderstanding. Just wanted to clarify. — SGPrometheus · 590 10/9/20
No I absolutely mean getting clues back on a location so you can clear Cover Up. The clues on Cover Up aren't "your clues," since they are on a weakness. I expect everyone who runs Roland has had a scenario or two where Cover Up came out after the last clue was picked up and there is nothing to be done. As long as you haven't spent all of Roland's clues, Dirge will actually help you get them down to let you clear the other weakness. For 5 actions (including getting the orignial clues back), but, still.... — LivefromBenefitSt · 779 10/9/20