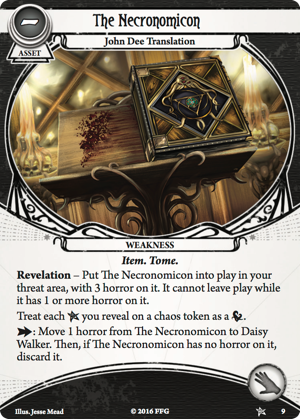 Generally speaking, this is probably one of the most forgiving special weakness cards in the game so far. You don't have to take the horror off of it if you don't want to, and let's be honest, how many times do you actually pull that blue token out of the bag anyway? That particular portion can be quite swingy in its effect, I have lost at least one scenario where I drew the blue and then the red token and we lost. But overall I find the worst part of John Dee's Translation to be how it usurps a hand slot. You didn't need that Magnifying Glass, right? Daisy's Tote Bag is insurance against losing that hand slot to The Necronomicon. On a more positive note, it's a much better translation than the Simonomicon or whichever version was in that cabin in the woods that summons a demon horde AND you can use it's ability as a free action thanks to Daisy Walker's special ability.

miggydoh · 52
I usually ignore the Necronomicon. Assuming I have Old Book of Lore or Encyclopedia out in addition to it, forfeiting three free uses of one or the other of those and taking three horror merely to clear the Necronomicon rarely seems worth it. — CaiusDrewart · 1890 8/18/17
It really isn't all that threatening. I never feel pressed to get rid of it either. It's mostly just been a minor nuisance. — miggydoh · 52 8/19/17
It's a bit worse if you're playing on easy/standard where you can often boost your checks enough to succeed on "all but tentacles", where this doubles the risk of failure. That can be bad if you're getting ready to play a high-impact single card such as Deciphered Reality, or the Guiding Stones version of the glyph. I'd consider using a turn to clear it before attempting one of those. — Low_Chance · 4 4/27/18
http://www.cardgamedb.com/index.php/CoC/CoCCards.html/_/revelations/the-unspeakable-pages/the-necronomicon-john-dee-translation-tup — BremenRADS · 13 10/16/19
Is this art by Shane M. Tyree or by Jesse Mead? — BremenRADS · 13 10/16/19
How does this interact with Seal of the Elder Sign? It both says “do not reveal” and “treat the symbol revealed” on the text. — krzhang · 4 11/21/19
krzhang I think year later this respond means nothing to you but I belive elder sign is not effected by it since you are not revealing a chaos token and this card specificly says it triggers when you "reveal" — Makaramus · 2 11/10/20