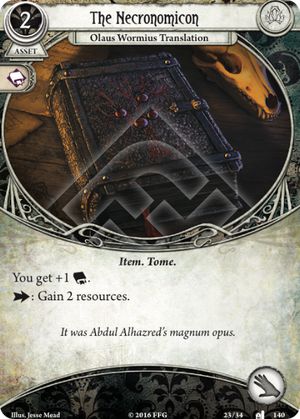 Amazing for Daisy, awful for everyone else

You know how Dr. Milan Christopher is an amazing card, one that you essentially want to get out IMMEDIATELY in any seeker deck? Well, if you're Daisy Walker, this is basically another copy of Dr. Milan Christopher in your deck, except it counts as a tome and thereby improves your eldritch sign ability instead of taking up an ally slot. The Necronomicon shouldn't be thought of as a replacement for the good doctor so much as as an additional copy. If you hard-mulligan for Dr. Christopher, you have a 55% chance of drawing him in your opening hand in a 31 card deck. Adding in The Necronomicon vaults the chances of drawing one of those three cards in your now 32-card deck up to 69%! {nice} The card pays for itself first turn, costing you 1 action and a hand slot for a permanent assurance of never running out of resources.

Given the utility of Higher Education, having some sort of resource-drawing engine in play is critical for Daisy. While it's no replacement for Dr. Milan Christopher, it dramatically increases your chance of survival. And if you have both out, you can pull a whopping 6 resources/turn for the cost of...a free action. Encourage your partners to run Teamwork so you can share the bounty, and watch as resource intensive cards like Streetwise and Keen Eye suddenly become a lot more valuable.

If you're not Daisy, then this card becomes terrible. Obviously, this is a story asset, so taking it for plot reasons is always an option, but if you're asking if you want it in your deck, the answer is a pretty clear no. It takes an action to put in play, and an action to use. The first use just covers its cost to play, so you're down 2 actions for no gain. The second use gets you two resources, but you could have just gained two resources instead of playing & using it, so you're still down a net one resource. You have to use five actions to have more resources than someone who just used the last four actions to gather resources! Alternatively, it's an action and 2 resources for a +1 into boost, which is pretty crap compared to just playing a Magnifying Glass.

Player without the Necronomicon

dharladay · 66
surely the +1 int compensates for how long it takes to pay for itself? — fistofyogsothoth · 33 1/14/20
Errr, ok, fine, this review makes sense, but please don't forget that this necronomicon also comes with a pretty severe drawback - adding an Elder Thing to the Chaos bag, usually the worst one on the Dunwich Legacy (sometimes even worse than Tentacles - U&U, I'm looking at you!) — Lettucefolk · 1 4/8/20
That's a good point, but unlike the mag glass, this +1 will also help you with False Leads or some parlay actions. Compare to Hawk-eye folding camera, which costs the same, but you won't get the int boost until you've cleared two locations of clues. It also gives you a wp boost with the first location, and +1 sanity with the 3rd, but seems like the necronomicon is at least comparable in power — Zinjanthropus · 156 5/30/20
Also if Daisy takes this (which she should IMO), she can upgrade into Protective Incantation to seal the new token, using the Necronomicon to cover the upkeep cost! — MiskatonicFrosh · 79 8/13/20