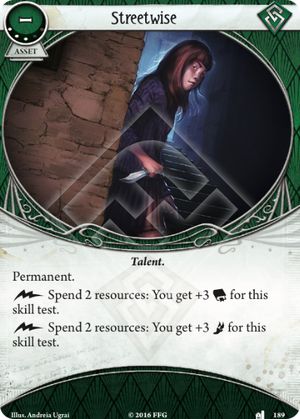 In my opinion, this is a very good card.

As an introductory overview: the Blood on the Altar Mythos Pack introduced 5 level 3 cards with the Permanent keyword. There's one card for each class, and they each provide a reusable way to boost 2 types of skills, though they all go about it a little differently. In general, most of these cards are regarded as quite good, as the Permanent keyword means that they start off in play, so they're always there when you need them.

Streetwise is the Rogue entry of the Blood on the Altar Permanent series. For 2 resources, you can boost or by 3 for a single test. These are the same 2 skills boosted by Hyperawareness. The first series of "spend resources to boost skills" assets in the core set allowed investigators to spend resources for skills on a 1 for 1 basis (like how Hyperawareness lets you spend 1 resource to boost or by 1 for a single test). Compared to these, I sometimes think of Streetwise as a "buy 2, get 1 free" sale since you get a +3 bonus for when you're only paying 2 resources for the ability. It's pretty nice.

I think the two skills that Streetwise boosts are appropriate for Rogue investigators. The skill is critical, since obtaining clues is fundamental to winning many of the game's scenarios, so being able to boost that skill is important. The is somewhat less useful, but many Rogue investigators already have a high base skill, so Streetwise helps them specialize more on what they're already good at doing. While it's usually not a permanent solution, using will let you evade enemies, and the also helps protect you from some unpleasant treacheries.

The bottom line: the helps you acquire clues, and the helps you avoid monsters, and these are the two primary obstacles the game throws at you. Streetwise gives you the tools to overcome both of these obstacles, and it does so right from the start of the scenario. I think it really makes a difference.

From a design standpoint, I think the intention was to make Streetwise the "go big or go home" type of card. It gives a nice bonus, but you need to invest 2 resources every time you want to use it. I do think that this philosophy compliments the Rogue investigator playstyle. I also think that Rogue investigators are the ones most likely to get the most out of a "pay to win" strategy. A the time of this writing (the release of The Circle Undone deluxe expansion), the Rogue has a lot of options for generating resources. At level 0, there's Lone Wolf and "Watch this!". Once you get experience, there's Hot Streak (2) and Hot Streak (4). These cards can provide Rogue investigators with a lot of fuel for Streetwise.

I haven't put together a deck for Preston Fairmont yet, but just from looking at his cards and his skills, I think Streetwise is an essential upgrade for him. Jenny Barnes also probably wants to get this card sooner rather than later, since her ability almost guarantees she can use one of the Streetwise effects at least once a turn.

There are some drawbacks to this card. You can't use it if you have 0 or 1 resources. It won't help you on or tests. It costs 3 experience points, so if you don't plan on activating either of its abilities, you should invest that experience points elsewhere. In my opinion, these drawbacks are very minor, and the resource cost can usually be planned around with some foresight.

This card doesn't quite give you the same value that you get from Higher Education - that card is very, very, very good. However, this Streetwise is still good enough that most Rogue investigators are going to want to take it somewhere down the line.