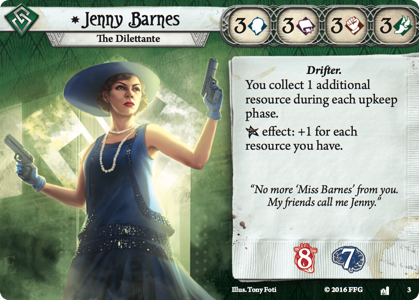 Jack of All Trades, Master of None, that is Jenny.

Her stats, straight 3's across the board, make this Dilettante okay at many things, but not incredibly likely to succeed at higher difficulties if she doesn't have something to support her. However, on Easy or Normal she's just one Magnifying Glass away from being a pretty good investigator, especially if she can also grab a Flashlight for those high-shroud locations.

In combat, Jenny is again decent but by no means a powerhouse. Her Jenny's Twin .45s signature card gives her a nice offensive boost, as 5 deals with most non-elites okay. She also has access to the Rogue card pool, so evading is a natural choice. With someone like a Cat Burglar watching her back, she can evade most monsters for quite a while.

The simple truth is that Jenny needs assets and other support cards to help her make skill checks because you simply can't rely on a 3 to carry you very far. However, Jenny has a major advantage in this regard: she gains double the resources everyone else does during the Upkeep phase.

Which, for example, means she can afford to buy a number of high-cost assets, and still put money into her Streetwise when she needs to make a check. In addition, Leo De Luca is a great Rogue Card that rivals the most expensive card in the game. Most players who can play Leo do so, but always have to make a bit of a sour face when they realize just how much money he costs. Jenny knows she'll have more money shortly, so plays Leo gladly.

A brief mention of Jenny's signature weakness, Searching for Izzie. It depends entirely on when it's drawn. Early in a scenario, it'll probably be fine, but if drawn near the end you are taking that trauma.

So, how does Jenny compare to the other Rogues?

In conclusion: Jenny has a rather different playstyle than any of the other Rogues. She does remind me a bit of the playstyle of certain Mystics, where once you have all your spells (or assets in the case of Jenny) you will perform great, but until then you are hurting.

Veronica212 · 160
Once you get Streetwise, Jenny can investigate or evade once per turn, without any asset played. — Django · 3819 6/7/18
True, but you'll want to develop your board. Even at a 6, investigating for a single clue once a turn isn't amazing, and just evading doesn't defeat any monsters. — Veronica212 · 160 6/9/18
People really need to stop having that 'you need to defeat monsters' mentality. — jd9000 · 56 6/10/18
Jday90, doesn't that depend on the number of players..? With four players, monsters spawn like roaches (sometimes literally) and in my experience you need to keep their numbers down less you get overwhelmed by a flock of byakhees. Of course, Vengeance shake things up a bit. — olahren · 1547 6/11/18
@jd90 I think people have a "you need to have some way of dealing with monsters" mentality, and if it takes as many actions to kill the monster as it would to evade it, so much the better. People want to deal with monsters in as few actions as possible; if the monster has hunter that often means killing and if it doesn't, one can evade, probably. Evasion just isn't as effective as killing (obviously), but it definitely has its place. You may be right that people don't value it highly enough, but I agree with @olahren; once you get up to about 3 players, someone needs to start culling monsters or the seeker can't do their job. — SGPrometheus · 594 6/11/18
Evading is valuable in a 4 player game when 3 of 4 can't locate their weapons... — Django · 3819 6/12/18
4

Jenny is in my top 3 list of Investigators to hand people to get them hooked on Arkham.

Jenny has a ton going for her. Firstly, her theme is awesome: there is a reason she is the 'face' of the Arkham Files universe: she isn't some rich snob, she isn't some femme fatal, she is a woman out to Do What It Takes and is fairly open about it.

Secondly, she has a clear gimmick and playstyle (Use money to replace a power) that isn't too complicated (if you just hand her the classic Jenny "pump to win" combo of Physical Training and Streetwise). Is Jenny ever going to be the most efficient at a task? No. Is a player ever going to flounder to figure out how to get out of a situation or contribute to the team as Jenny? Also no. She is, in many ways, a perfect flex, because once you upgrade Streetwise (Ideally ignoring taboos for your first game and just conveniently leaving elusive in the binder) she can from turn 1 handle basically any issue sufficiently, meaning your entire table (which may also include 2 other scared newbies) has someone who at the very least can keep the baddies exhausted if the first mythos flop womps ya.

Thirdly, and more importantly, Jenny just instantly creates stories at the table if you hand a newbie a beginner deck filled with evocative cards. Is Enchanted Blade the strongest use of your off class card pool? Haha, no. Are people instantly going to be invested in the campaign and Jenny as a character (and likely anyone else in the location with her) after she cuts a Ghoul's head off using it, standing there fencing monsters to death with a magical god damn sword while wearing a dress with pearls... and Track Shoes while Chain Smoking? The picture just paints itself, and the fact you get to punctuate it with 'and then you draw a card' is just pure icing on the cake that makes the player think 'Wow, I feel awesome' juuuust in time for the Ghoul Priest to show up and make everyone wonder how the heck they are going to do 20 damage to him, especially because her sword ran out...

And then, of course, Jenny often is the best gator to either evade tank the priest to save the day, or run over to pick up a new friend.

Pretty much every Jenny game of The Gathering goes the same way if you make a beginner friendly deck, with a built in three act structure to really get your hooks into them, and once you go on longer campaigns Jenny's access to Streetwise alone means she always has a way to contribute, and is almost never helpless or forced to be passive. She may not be the star of every scenario, but she often will get the chance to shine more often than not, and she never is the punching bag of one.

So even though Jenny is never going to be the wild gamebreaker like some of the other rogues, she is still a super worthy addition to the game, because you can toss her into pretty much any campaign and know the person playing them is gunna have a good time. She is supremely newbie friendly even on standard and lets people hit the ground running feeling awesome but not overpowered or overcomplicated.

dezzmont · 70
Her dual pistols as well. I don't think they are that good, but they feel great :-P — NarkasisBroon · 1 11/6/21
Yeah. Part of why Jenny is so iconic is the juxtoposition of her as this classy lady with the dainty gloves being used to grip two handguns with all the rage of a protective sister. It is absolutely fantastic. — dezzmont · 70 11/6/21
Just curious - who are the other two investigators in your top 3? — snacc · 497 11/25/21