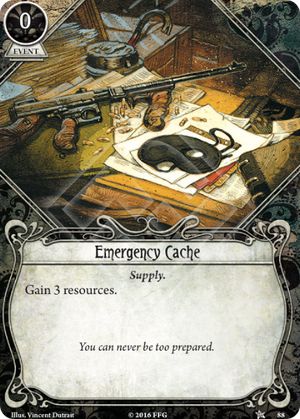 "Money is only a tool. It will take you wherever you wish, but it will not replace you as the driver." Ayn Rand depicted the reasons for including Emergency Cache with few words, but you surely expect a longer explanation.

An event that gives you 3 resources for one action sounds like an auto-include in most decks. It speeds up your initial setup: play Emergency Cache, play Leo De Luca or Dr. Milan Christopher and still have 2 actions and resources to spend. Mid-game it can fuel the "pump" skills, like Dig Deep, for you. Late-game it probably sticks on your hand as a "dead draw". Emergency Cache has no alternative use, no icons to commit to skill tests. With a huge resource pool, you can buy anything, but you need expensive cards in the sale, too!

As a rule of thumb, i would offer you Spiryt's advise: If you can see yourself spending more than one action per scenario fishing for resources, then this card is a great way of ensuring you have the means to play your most powerful cards.

With more packs being released, the number of economy sources will raise. Right now, the slot for Emergency Cache mainly competes with Burglary and Dr. Milan Christopher (with 0 xp) and Hot Streak(4). Especially the guardian class runs low on resources, in-faction there's solely Stand Together(3). In solo play, Lone Wolf always is the better alternative to Emergency Cache.

Synisill · 751
I actually dislike this one: you gain 3 ressources. Instead of playing the card, you could have earned 1. Instead of drawing the card, you could have earned 1. Your net gain is thus 1 ressource. However, this is at this expense of a deck slot - you trade the use of a much more useful card for 1 ressource. Is the compression of the gain of 1 ressource worth loosing the opportunity of having a better card in your hand ? I don't think so. Poor deal. — jd9000 · 56 6/14/17
@jd90, trying to evaluate cards by the sum of actions is simplicistic. As a first approximation it is okay, but would you, as an example, also claim that Lucky!'s cost is in a range between 3 and 5 actions? 1 for the resource, 1 to draw the card, and roundabout 1-3 actions for skill tests, because maybe you succeed on the next two skill tests... You don't like that example? Fine, check "Guts" then. This card is regulary included in many good decks - because of the high percentage of gaining 1 additional action (together with the successful skill test). — Synisill · 751 6/14/17
Not a bad card to include in a Dark Horse deck. — dlikos · 20 4/18/20
4

In the board game Seven Wonders, Nefertiti gives you four victory points for four bucks. Other leaders have more variable powers, but she is a good measuring point for whether or not something is worth four bucks.

It’s been three years since the last review of emergency cache. There are a lot of ways to get money at your deck now, so the question is… Is it still worth taking this thing?

The individually sold investigators added new ways to get money for blue yellow green and purple. For the first three, it’s relatively simple: take an action you would normally take (fight, investigate, or evade) and do that as well as getting two bucks. For mystics, they have to draw tokens and hope for symbols, rewarding having Olive out and playing Jacqueline.

So why do we still need emergency cache? It’s definitely more niche, but for decks outside of green that need a lot of money, or blue characters that support more than they fight, or expensive purple decks that don’t do token manipulation...This card is efficient. And it can grow with your team: its (2) upgrade lets you draw a card, giving you four actions for the cost of one. And for 3XP, you can power chainsaws or alchemical concoctions.

So this card is still a Nefertiti. It’s a sometimes food, which makes sense because it’s not called “everyday cache.”

EDIT: with more experience, I see the value of the card. But if you've got a lot of 0-cost cards (Shortcut, Leather Jacket), abilities that draw resources (Zoey's special ability, Dr Milan Christopher), and not a lot of skill cards that increase your card draw, then you may not see any value in it.

In the beginning of the opening round and at the end of each round, you gain cards and resources at a 1:1 ratio.

With all skill cards as well as many events and assets costing 0, not to forget that you'll commit cards and especially asset cards when slots are full... a resources needed per card ratio of 1:1 seems common in my decks and many of those I see about on this website.

With my limited experience and player card pool, depending on the investigator/s chosen, I've found I'm more likely to end a game with up to 10 unneeded resources than lack the resources needed to play a card.

shenaniganz11 · 9
This is strange. It of course depends fully on what type of investigators you are playing, so it's difficult to evaluate. One thing you should keep in mind is that resources are much more important at the beginning of the game. Say you're playing Roland Banks and you want your Machete and Beat Cop out. That is 7 resources right out of the gate. Playing EC+Machete+Cop grants you to have both in play on turn one, otherwise you'd have to wait 2 rounds until both can be played. Another thing is, if you have too many resources, it's usually good to somehow make use of these, either by including expensive tech cards, or resource sink cards (for example Talents that boost your stats like Physical Training, which will help you to fight and deal with Treachery cards). Third, you might have some cards in your deck that accellerate your card draw, causing you to need more resources. I once had an "Ashcan" Pete deck that always had lots of resources left, so I invested into Scrapper (3), which helped me pass lots of skill tests. Do you have a link to one of your decks that never runs out of resources? — PowLee · 10 10/8/20
Yeah, this is a bizarre assessment that I'll chock up to, as you said, limited experience. Outside of specific rogue builds that like hoarding, if at any point you find yourself sitting on a pile of resources that large, 9 times out of 10 that means something has gone wrong. Usually it means you're not playing cards--maybe you're not drawing the ones you need, or you need to tune your deck a little, or you're just going through the scenario taking raw actions and pitching icons as needed (which is horribly inefficient)--but in any case, something is wrong. Granted, not all decks need Emergency Cache, some cards have made it obsolete depending on your faction, but the vast majority of decks need some sort of resource generation (even Dark Horse builds!) if for no other reason than on average playing a card is going to leave you at a deficit. On that note I'm not sure where you've gotten the idea that "many" assets and events cost 0; the overwhelming majority cost multiple resources to play, even if you're just looking at the core set. Whatever the case, you're definitely not playing a Guardian, I'm guessing maybe Seeker, since a lot of their earlier cards are on the cheap side. — MiskatonicFrosh · 126 10/9/20
I was playing a guardian, Zoey, when i ended with as many as 10. https://arkhamdb.com/deck/view/1004670 — shenaniganz11 · 9 10/14/20
Your link isn't public, but that explains it. Zoey has excellent economy on her own as long as she's doing her job, and can easily forgo this card. Other guardians generally need a little more help. Like PowLee I'd recommend loading her with talents like Physical Training (and maybe Hyperawareness for the full stat coverage) so she can use those extra resources to win. — MiskatonicFrosh · 126 10/14/20