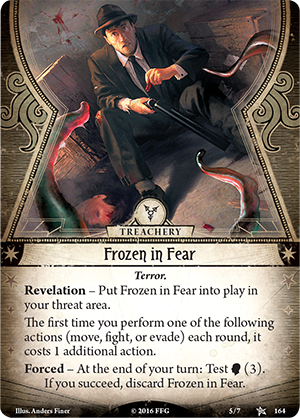 The bane of Rogues everywhere. This card, along with Rotting Remains, make Finn have trouble sleeping at night. You're going to be doing those sorts of tests more often than not, so having an answer for this card is important. Notable interaction: Momentum - Use Lockpicks or something to oversucceed by 3 as your last action, then test Frozen in Fear at difficulty 0!

KasaiAisu · 39
You could also include Logical Reasoning to deal with it as well. Finn and Tony can both manage that. For Preston, well, I hope you packed some "You handle this one!"s or else pump a bunch of resources into Dig Deep (or save them for Well Connected, but that might take a long while to clear if you get this early). Wini's 1 will, I've said before, is more like 3 because all of her stats go much further than normal (due to her high draw and desire to commit). Wini can reliably break this. — StyxTBeuford · 12689 3/28/21
Momentum says "This Phase." — MrGoldbee · 1218 3/28/21
"At the end of your turn" is still within the Investigation phase, so this seems absolutely legit. — Susumu · 206 3/28/21
@ StyxTBeuford: a 3 vs. 3 is still a terrible test. And I don't think, Wini would like to pack lots of will icons into her deck, so she would have to sacrifice valuble wilds on a test, she likely fails anyway. Preston on the other hand can safe up some resources to push the test reliable, or if he is Dark Horse, push himself up to 5 with "Rise to the Occasion". I think, the Momentum-trick is a great find, particularly for Wini. — Susumu · 206 3/30/21
You commit a little extra for Wini if you really need to is what I was getting at. I wouldn’t commit 2 to get 3v3, but if I commit 3 cards to get me to maybe 2 up, that’s not too bad, and you still draw a card. Her draw makes it so that high committing on a 1 isn’t that costly. Plus her signature is great for these kinds of tests. I do agree that Momentum is the best way to go. — StyxTBeuford · 12689 3/30/21
Plus Wini takes Momentum typically anyway. — StyxTBeuford · 12689 3/30/21
Just rush for two Sure Gambles as the cheapest and most reliable way to break this on Winifred or Finn. — suika · 8459 3/31/21