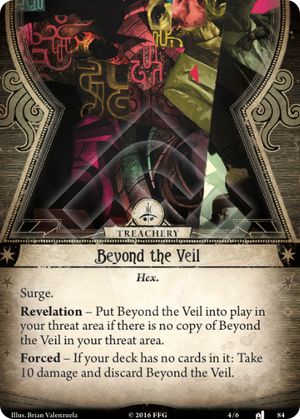 One od the worst drsigned cards in the game. Treachery cards that gice you no recourse to deal with them are a design flaw. The other issue is that for some xharacters this us trivial, while it is an almost guaranteed defeat for others.

Tilted Libra · 22
There are ways to deal. Cancel the card, let it trigger and cancel the damage, be hardcore and just take it, Alter Fate, or resign. Or just stop drawing cards. I think anyone can do at least one of these. — TheNameWasTaken · 3 6/8/20
I cant think of a single character who is definitively destroyed by this card. Patrice without tech (eg 1 copy of Quantum Flux) still has a very strong chance of pulling her Elder Sign which prevents her being decked out, and draw heavy characters like Wini or Seekers have full control over their draw power. This card has literally never killed me, and it’s not hard to tech against if you are worried about it. And in a game where losing a scenario is nowhere close to the end for your character, I cannot agree that it’s a design flaw. — StyxTBeuford · 12504 6/8/20
I would just point out that while draw-heavy investigators have full control of their draw power, it still potentially shuts down their play style. That being said, needing to choose / build your investigator to counter campaign specific stuff is certainly not unique to Dunwich. — Zinjanthropus · 165 6/8/20
Also just because you have counters In your deck doesn’t mean you have them available with this card. They might be discarded to other milling effects in dunwich... — Django · 3616 6/9/20
I think generally most draw reliant investigators are Seekers who generally are already really powerful without needing the absurd draw anyway. And the more draw heavy your deck is, the more reliably you can find the tech for this before it hits you. — StyxTBeuford · 12504 6/10/20
@StyxTBeauford: While I do agree about Seekers (and they could use deck searching instead of straight draw, anyway), I don't think that Winifred is very good if she can't draw through her deck (The draw is really what makes her so OP). Though I suppose she could Versatile for Quantum Flux pretty easily. — Zinjanthropus · 165 6/10/20
Since this is included with milling effects, it can easily kill any investigator. — Tilted Libra · 22 6/19/20
@StyxTBeuford Have you played Patrice much? You can eaily go a whole scenario without pulling her Elder Sign. And when the only recourse to something is a random chance, that isn't good design — Tilted Libra · 22 6/19/20
@Tilted Libra, Eucatastrophe does wonders for Patrice against this card. There are definitely ways to handle this. It just takes planning. — dapineapple · 1 6/21/20
Ive played Patrice tons, I almost always pull her elder sign before she decks out. If you build her to test a lot it’s really not a big risk. — StyxTBeuford · 12504 6/21/20
In Dunwich I play Patrice with her friend, Olive. They do well together, making avoiding bad stuff like that trivial. — chrome · 6 7/13/21
4

This seems to be a contentious card, but in my opinion the worst part about the card is that it simply isn't fun or interesting. Many of the card milling mechanics in Dunwich don't have significant counterplay and it's easy to draw this at 10 cards left in your deck and just eat shit. Every other strong encounter card has something you can do to mitigate its effects, like passing a skill check. This is just really boring and doesn't make me excited to play Arkham Horror.

the_mllkman · 5
There are a fair few ways to deal with it at this point tbf. Anything that targets revelation effects (ward of protection, test of will), anything that cancels damage (deny existence, devil's luck), anything that discards from play (Otherworld codex, alter fate) all just stop it cold. Stuff that manipulates the encounter deck (First Watch, Scroll of Secrets) can point it at a less vulnerable investigator or use the other milling effects to reset your deck. And in most of the scenarios where it appears there's room for at least one investigator to resign to dodge its trauma and you usually have enough warning to do that. You Handle This One will get rid of it if you have a friend who can deal with it/doesn't mind it/has a bigger deck. And all the other milling things are pretty irrelevant if you can stop Beyond the Veil itself. So while it's a big card, I don't think it's *that* hard to stop, almost any anti-encounter event will do the job, most encounter and most of the encounter decks that it appears in are built around it as the main threat. I don't think it's a wholly successful experiment, but it does give TDL a distinctive mechanical identity, and my experience is that dealing with it successfully does feel fun and satisfying. — bee123 · 24 8/23/20
One more satisfying way to deal with it mitigate it's badness — NarkasisBroon · 1 8/23/20
If you use first watch, you handle this one, etc. You can put it on a player who already has a copy in their threat area. In which case it just surges — NarkasisBroon · 1 8/23/20
Of course you can do something to mitigate the effect, especially now years after the Dunwich Legacy came out: You can cancel the damage, counter the encounter card, soak the damage, avoid drawing the encounter card, remove the card with Alter Fate, reshuffle your discard pile into the deck with Quantum Flux, increase your deck size with Versatile, draw fewer cards (or draw enough cards to reshuffle your deck before you draw Beyond the Veil). I just played the Dunwich Legacy with Marie and Joe. Marie had Deny Existence and Joe was running enough soak and Delay the inevitable to mitigate the high amount of damage this card deals. There are so many ways to deal with this card. Actually this makes me excited to play Arkham, because I would be very bored if the game was only about passing skill checks and did not include curveballs like this. However, I have to admit though that I did not understand the flavor of this card at first. But now I think it relates to the story: "Through the Gates of the Silver Key" where Randolph Carter loses his body after transcending time and space. The entity who grants this ability and curse to him is strongly implied to be Yog Sothoth so it makes sense in context of the campaign. — PowLee · 10 8/24/20
You can also run ‘I‘ll see you in hell‘ or ‘ghastly revelation‘ to lean into it killing you. Just use those on your own terms before the veil kills you. As a seeker, the ghastly revelation will just give you a mental trauma which (usually) isn’t a big deal. And you can use them to set your team up for the win — Pixcalcis · 1 9/9/20
There is almost no recourse in the core set or dunwich set, which were the cards available at the time, and are still the only cards available for those just getting into the game, playing in order. — eskimoform · 45 10/27/20
But there was also hardly enough card draw available in that old card pool to churn through your deck enough to be a playstyle. — Death by Chocolate · 836 3/26/21