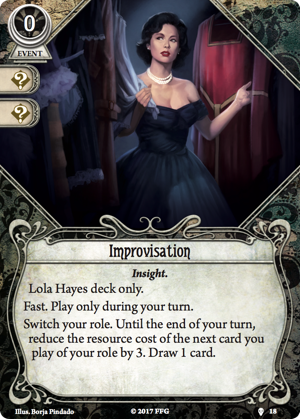 mattastrophic · 1860
I have been thinking about this actually, as I tinker with Lola builds: much attention is payed to Crisis of Identity and how bad it can be, but it is worth remembering that Improvisation is super good. Lola can take an Eidetic Memeory as a psuedo third copy too; it is a bit less flexible as she needs to be in Seeker to play it, but still could easily be worth the xp. — Spritz · 60 8/17/19
0

It is worth noting that Lola's weakness, "Crisis of Identity," can effectively negate this card (and certainly whatever strategy you'd cooked up, forcing you to discard the very card you'd hoped to play), if picked up during the forced draw. If there's still two CoDs lurking around in your deck, make sure you don't burn your Investigator ability to fast switch roles before playing this in crisis situations.

Sarkazein13 · 1
Good point! Combo abuse is real. For my last LoL I built the Seeker/Boss Killer deck (Lupara with DoN, Quick Thinking, Fight or Flight and Red-Gloved Man, additionally .45 and Ace in the Hole, potential to hit for 20dmg in one turn) and my plan was ruined by Impro -> CoI draw (-8dmg since i had no switch after Lupara) and autofail during a second shot (-6dmg). I was sad as i've been waiting for that moment of glory the whole week but also pretty excited about my discovery :) — KptMarchewa · 1 7/20/18
will to survive? — Django · 3425 7/20/18
Crisis of Identity doesn't discard cards from your hand, only from play. A big part of playing Lola is trying to NEVER DRAW when you could lose a bunch of assets from Crisis of Identity. I agree, Improv doesn't exactly make that easy. — duke_loves_biscuits · 892 7/20/18
Fantastic, but expensive card in both resource and exp. Of course an option worth considering, I just prefer another ones for her. — KptMarchewa · 1 7/20/18
@duke_loves_biscuits you're right. The point is that CoI drawn by Impro can abuse a plan by unwelcome switch. — KptMarchewa · 1 7/20/18
Use any version of "scrying" to know the next 3 cards in advance, when going for such a big move. I know big girls don't (s)cry, but sometimes it's necessary. — Django · 3425 7/20/18
@KptMarchawa, but @duke_loves_biscuits point is that what @Sarkazein said ‘forcing to discard the very card you’d hope to play’ is not a thing that can happen (unless draw into Amnesia >.< ). — Death by Chocolate · 712 7/20/18
The gap between the helpfulness of Lola's signature cards and the harmfulness of her weaknesses is just so big. Poor Lola. — CaiusDrewart · 2350 7/22/18
It's notable how this card is worth AT LEAST 2 XP being effectively a fast Emergency Cache (2), making the best signature card any investigator could have had, while that mandatory card draw can totally ruin your day. Good point with Scrying. It can totally help in such situations. Scrying (3) is probably the better choice for action economy. — matt88 · 2197 7/22/18
In my opinion CoI doesn't need to be scried as any other weakness usually doesn't need to be scried. Scrying sees a very little play in most decks and I don't see a reason to put it in Lola's deck as well - especially with her role mechanism. Impro is not only a fast EC (2), it is also Unexpected Courage in one card - sweet! — KptMarchewa · 1 7/23/18
Scrying is def of value in Lola. Scrying (3) is far superior but even Scrying (0) has play, and buying a few turns of colour-swap knowledge can be worth an action. (And this is coming from someone who generally hates Scrying (0) and dies a little inside every time my Agnes buddy plays it). — duke_loves_biscuits · 892 7/23/18
I consider a fast EC (2) to be pretty weak for a signature card. I mean, it's perfectly efficient, you'll take it in your deck, but it's not remotely gamebreaking (while her weakness is.) — CaiusDrewart · 2350 7/23/18
I wish Lola's special card instead offered some kind of deck searching, so she could be the combo-centric investigator she was always meant to be. That would be way more exciting. — CaiusDrewart · 2350 7/23/18
To be honest, I'm just curious how much you base either on your experience or pure theory - I'm playing and testing her for a half year (my definitely favourite gator) and I have completely differend opinion about her weakness and, generally, her conception- in most cases (with a properly built deck and careful playstyle) it is only a dead draw, even if I hit it when I'm in a role with 1-2 assets i wouldn't call it "gamebreaking". And no, her deckbuilding power is definitely not being combo-centric - role mechanism just kills it. It is possibility to take any powerful card in game (not each will work well, but many will) and possibility to prepare well to literally every scenario with Adaptable. And, of course, a plenty of fun with her deckbuilding and mechanics :) — KptMarchewa · 1 7/24/18
Agreed, my experience playing Lola is that she is fun and versatile but benefits far more from individually impactful cards than cross-class combos. Between her oversized deck and the role mechanic, they are very unreliable and clunky to pull off. — Death by Chocolate · 712 7/24/18
@KptMarchewa: I've taken Lola through Carcosa once, and she's been at the table with other players several times. So I have some experience with her, although I wouldn't call myself an expert with her. I found her weakness enormously troubling. And yeah, she's not a combo investigator, though I wish she was. I wasn't using Adaptable when I played her, since I was playing Carcosa blind. — CaiusDrewart · 2350 7/27/18
@KptMarchewa: In my experience (and the rest of my group who've played her) her role mechanic has been much more frustrating than fun. She's also an investigator who--at least in my opinion--falls off quite a bit at higher difficulties, so that was another problem for us. However, I can definitely see how some people would enjoy the unique challenges and variety of options that she presents. I'm glad you've had more positive experiences with her! :) — CaiusDrewart · 2350 7/27/18
Brofist! :D Fortunately AH LCG is not a competitive game so everyone can play with gator he just likes. You like taking a challenge (nice BGG expert guide btw!) while I like playing with mechanics I'm interested in even if they are underpowered (although reaching the best DL resolution with Lola solo on standard difficulty is not a big problem for me which is not so bad imo). — KptMarchewa · 1 7/27/18
I have a question regarding fast cards I'm hoping someone can help with. The text for Lola states "Switch your role. Until the end of your turn, reduce the resource cost of the next card you play of your role by 3. Draw 1 card" - the question is: is it possible to play another fast card between the switching of roles and the forced card draw? — rex · 1 6/29/19
You cannot. You have to resolve all of Improvisation before you get another window to initiate a free "lightning bolt" action. — mattastrophic · 1860 8/20/19
0

It may be kind of a dumb question, but I could not find the answer to it on BGG or here: can you use improvisation to switch role to the same one? I.e. your current role is Mystic amd you switch into Mystic to benefit from the discount.

grizzling · 20
I understand "switch your role" as change your role, so If you stay in the same one, your not actually changing anything. — Fenrirgarm · 5 1/18/20
How "switching" works is pretty undefined in the game rules, so you're pretty much good to do what you want. One thing to note, though... if you swap roles after playing Improvisation, the discount carries over! — mattastrophic · 1860 4/15/20