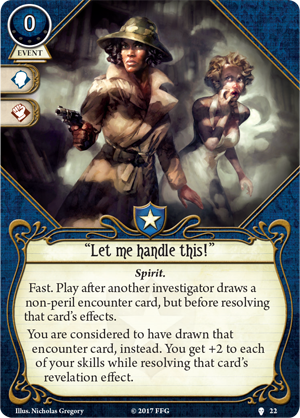 This card can be used on enemies and the other investigator does not have to be at your location.

This card is great to protect other (noncombat) players because it can be used on enemies and spawns them on the users location, instead. It also saves the user lots of move actions, if he's the main killer.

So long a player has this card, other players are basically immune to monsters. This allows noncombatants to split from the rest of the team and do some power clue gathering. But be aware, when there's 3 or more players, there's a chance all players draw an enemy.

Django · 3425
This card does more than steal enemies. Another side benefit is that it can take nasty Willpower checks away from those who cannot afford to fail them. Also, if a card does physical damage to an investigator with low stamina, this is a way for a Guardian with decent stamina to soak that damage. It's also a 0XP card so any of the investigators who can splash 5 cards of other classes can take this. This card is almost a must-include in all Guardian decks and those who can splash it should consider it. — mmychal · 1 3/5/18
Question: In a 2 player game, player #1 draws their encounter card during the Mythos phase. Player #2 plays Let me handle this. They resolve the card. Player #2 then has to draw another encounter card, which is their "card for turn", right? — VanyelAshke · 140 11/26/20
5

I like this card quite a bit. It makes me feel like a hero every time I play it well.

This card is a good counter to other investigators' encounter cards. Guardian investigators are good at fighting enemies, and this card gives them a fast and reliable way to pull enemies away from vulnerable teammates. However, this even works well on treacheries, thanks to the +2 bonus to every skill that it gives. Roland Banks taking a Rotting Remains for someone else gives him a of 5 (putting him on par with Agnes Baker) - if he takes Grasping Hands, he gets a of 4 (the same as "Skids" O'Toole and Wendy Adams). It really gives Guardian investigators an excuse to step out of their usual comfort zone.

There won't always be a super opportune moment to play this card - most investigator groups should have ways to succeed at scenarios without relying on events like this one, after all. However, occasionally there's a time when another investigator can do something really incredible, but they need all their actions or all of their resources/assets to do it and so they can't afford to be distracted by an encounter card - and those are the moments where it's great to step in and say "Let me handle this!" Sometimes allowing one player to go uninterrupted by an encounter card can be the tempo boost they need to carry you through a tough spot!

The skill icons aren't super remarkable. One and one is ok, but normally I find it's better to hold onto this card for its effect unless things are getting really desperate and there's a critical test that needs passing.

Of course, it goes without saying you shouldn't run this card when you're solo. You're already handling it all!