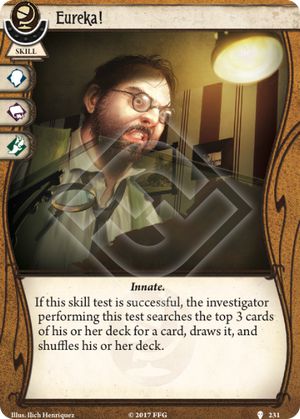 This card is a fantastic deck-cutter.

As skill cards go, +1 icon on a single test is low, the variety helps a bit, most characters can muster a use for either or , and anybody can use .

The benefit, the mini tutor, is just crazy for an action-less and cost-less effect. Use it to pull out key cards a little faster and/or obtain solutions to standing issues.

The low boost and useful success benefit means that you should play Eureka! on low risk tests, use it to push for a +3 or +4 advantage to secure the test. On standard/easy pushing for +2 is fine in early scenarios.

Any character with innate access should give Eureka! at least a passing thought.

Minh Thi Phan and Silas Marsh really like skills, this is obviously true for a strong one like Eureka!.

Eureka! is uniquely good for Norman Withers (for whom skills are low priority) since it bypasses his revealed top card and shuffles his deck, this gives him two chances to dig useful cards out of a deck with something unhelpful revealed on top.

The other review is underselling this card. At least on standard difficulty I think this is one of the top 5 best level 0 Seeker cards ever printed and a card that I shove into most of the decks that have full access to level 0 seeker cards. Comparing this to No Stone Unturned this card only digs 3 deep instead of 6 but doesn't require an action or 2 resources to use. This card is very easy to just throw onto any test that you're all but guaranteed to pass anyway (such as investigating a low shroud location) and then use it to have Eureka be replaced by whatever's the best card in the top 3 of your deck. The icons it has are fantastic, it's basically the only 3 skills you're likely to ever use so it can be committed to almost every test you take. On top of that, there's a lot of tests you might take where you're +3 above the test for example and passing it is important, but you don't want to spend any of your valuable cards to boost yourself up to +4. Eureka is great in those situations because you can insure that you are protected while also having the card cycle into something you need.

The card is just super versatile and is always useful, It's not necessarily a card that'll win you the game but it'll help you find those cards and is never a bad draw.

Sylvee · 80
I wouldn't go quite that far, there are an awful lot of fantastic lvl 0 seeker cards. I do broadly agree though, this is a card that I usually include in seeker builds. Excellent versatility, great filtered draw capability and there's also the added bonus that you may get a weakness which then gets shuffled back into the deck and will more often than not end up being avoided for much longer than it would have been otherwise. — Sassenach · 158 6/4/19
@sassenach I think you are wrong on that end. Sure, you can shuffle your weakness back into your deck, but you could also shuffle the weakness from the bottom to the top. The Chances to draw a certain card in your deck is always 1/n, where n is the number of cards. You dont draw a weakness with eureka!, sure, but the other draws are not affected propabilitywise. — Zimmt · 1 6/5/19
Hmm.. actually that's a good point. Still though, if you draw the top 3 after Eureka then you already know that a weakness that you pull as a result would definitely have been drawn within the next 3 draws. By shuffling it back it goes from 1 in 3 to 1 in however many cards are left, which in theory ought to improve the odds most of the time. I'm no mathematician though, so I could be wrong. — Sassenach · 158 6/5/19
@Sassenach That May be the case when there is a weakness in the top three, but most of the time there won’t be a weakness in the top three so far more frequently it is going from 0 in 3 to 1 in however many cards are left. I could explain the full calculations, but overall, Eureka doesn’t protect you from weaknesses on future draws - in fact by not drawing a weakness you increase the odds of a weakness draw in the future, but that’s just how drawing cards works. — Death by Chocolate · 1105 6/5/19
I didn't say it protected you from weaknesses, I said that when you do draw a weakness with it then it's a nice bonus, because in that scenario you do significantly improve your chances of not drawing that weakness again any time soon. — Sassenach · 158 6/6/19
The point being it's as much a bonus as it is a penalty since it is a statistical wash. That is, when you do see a weakness it is a nice bonus, but when you don't see a weakness it equally a penalty. So it's probably best not to consider it at all, since it's a considerably neutral aspect of the card. — pneuma08 · 26 6/7/19
Yeah I wouldn't consider the ability to shuffle a weakness away as a boon. Most of the time you don't draw the weakness in those top 3, so you go from a 0% chance of seeing it in 3 turns to a 3/N chance of seeing it in the next 3 turns. When you see it of course you improve your chances of not seeing it by shuffling the deck, but mathematically it all evens out. That wouldn't be the case if you had the CHOICE to shuffle your deck, but because it's forced the math evens out. — StyxTBeuford · 12689 6/14/19
However, if you consider that the alternative to a tutoring draw might be a blind draw it does better your chances of avoiding a weakness! — gustafusus · 1 7/16/21
1

For Minh, this card seems like an auto include.

Think about it this way, were you playing Guts!, Perception or Manual Dexterity?

Well, if you drop two copies of ANY of those cards you are trading a +1 and a card draw for the ability to perform a small, filtered draw.

Outside of Minh, I think this card struggles a bit in Seeker. Norman Withers may also like it for those turns where he sees a top card he doesn't particularly care for (the shuffle will give you another opportunity for a card, for better or worse). I don't think I would bother with this card in either Rex (outside of a weird build) or Daisy (she has Book of Lore).