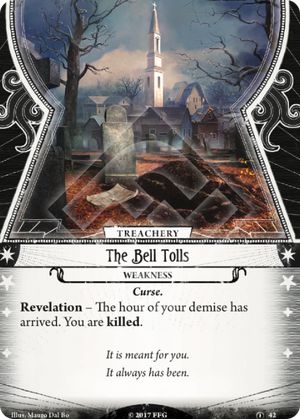 If you defeat yourself this turn as part of the effect of a spirit card resolution, you may carry over experience (half? minus some number?) when replacing this investigator after the scenario.

This would allow it to push the narrative and give some interesting incentives without the brunt of the devastating XP penalty it can burden the players with. It might actually be interesting to have to choose on the resolution of Doomed whether to defy fate (giving you Accursed Fate as it stands -- a longer timer, but enforce death with XP loss) or accept fate (giving you a different card with a shorter timer but allowing you to blow yourself up to carry XP over to a new investigator).

MrButtermancer · 18
That's the problem with any investigator death, and a fair number of campaigns have scenarios where getting defeated or doomed out means investigator death (and even more that end the campaign prematurely). So there's always the problem of how do you continue to play? The base line is: start a new investigator at 0 XP. If your group is OK with it, you can always house rule it to have you start a new investigator with any amount of XP you all find fair. You do have to draw this 5 times in a campaign for it to kill you, which may be unlikely, depending on who you are playing. Tommy has such slow draw, for example (plus reloading his deck) that you see maybe a third of your deck in any given scenario. Amanda is likely to deck herself 2-3 times in a scenario. If this Weakness is ruining your fun, you could always remove it from the Random Basic Weakness pool. — LivefromBenefitSt · 755 7/4/21