Add 1 doom to Blood Pact: You get +2 for this skill test. (Limit once per test.)

Add 1 doom to Blood Pact: You get +2 for this skill test. (Limit once per test.) 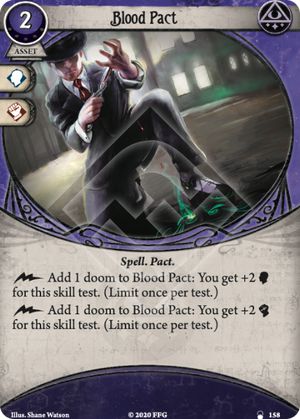 This is an amazing card in Dexter. In fact, you probably never even level it up in him. It boosts Dexter's favourite two stats - as a mystic, and for rogue guns as a backup, or when his weakness is messing with his will score. Combining it with Showmanship you can have a turn of +4 on each test of something you played that turn, and so long as you have an asset in your hand to play the next turn and the doom threshold is high enough, you can cycle it out before it would cause you to lose turns.

In a way, it's even better than items that run out of charges because it combos with pretty much any that you would play in Dexter. You can play it out early, and wait until either a turn you need it, or until the witching hour.

Naturally, its usefulness depends on the threshold of the level, but another benefit to Dexter is that it can simply be replaced for levels it isn't useful in with Adaptable (which is another reason never to upgrade it, too).

Outside of Dexter, I'm less sure. Sadly, it's harder to discard as any other mystic, though cards like Sacrifice certainly help. However, unlike most of the permanent stat-boosters, multiple copies are useful, which applies to both its level 0 version and level 3 version. Whereas your second Higher Education becomes a useless single copy in your deck once you get the permanent (and with the high experience cost, you're less likely to be able to upgrade it into something cheap), Blood Pact 0 does not. You can keep a single copy in deck until you have the experience to buy the second permanent and not lose out on anything, even that minor.

Marie Lambeau is the obvious one to play with doom, and while she gets little from the , her 4 makes boosts occasionally necessary. Jim Culver, Diana Stanley and Akachi Onyele can also make use of the boost, with Jim also suffering from having 4 in his key stat as a mystic. Diana also can have low early, and can make more reliable use of doom effects simply because she can cancel any nasty surprises in the mythos phase that might cause the agenda to advance.

The other benefit for a level 0 version of a level 3 card is that now a lot more people can take it. Of the Dunwich characters, a doomy Zoey Samaras or "Ashcan" Pete might be possible, but I doubt they'd be particularly effective. Rex Murphy is similar, but would much rather be using Alyssa Graham anyway. Daisy Walker doesn't get much from this, but would definitely consider the other doom card added in this set.

Sefina Rousseau might like the boost, but generally prefers events to assets that need to be discarded or otherwise dealt with. Perhaps mimicking Sacrifice or Moonlight Ritual with her paintings would be workable. Patrice Hathaway will always eventually run into either of those events, but they might show up at an inconvenient time and just get discarded. Whether that plays into Patrice well or badly, I couldn't really say.

Finally, Sister Mary benefits a great deal from the stat boosts, and can take all the relevant Mystic doom-synergy or asset-discard cards. Blood Pact can make up for being unable to take high level spells, or can boost her lower level weapons before she can take the higher ones and phase it out for an Extra Ammunition or something else that supports the big guns.

Overall, a card that might have just been printed for Dexter, but is still easily worth a look in several other people.

SSW · 116
You probably *don't* want to upgrade it in Dexter, since you can discard it when it's covered in doom with his :free: ability and clear the doom easily. You can't do that with the Permanent version. — Yenreb · 15 12/21/20