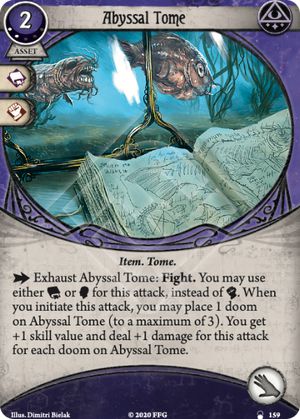 Note that you MAY use or for this attack, so also works. Helpful for Diana Stanley while her is still low.

She can also Scavenge 0 or 2 this book after discarding it. Assuming 1 hand slot occupied, 1 Abyssal Tome in play and 1 in discard, Scavenging 2 in play, she can switch them for 2 ressources, removing all doom.

Looks like David Renfield has written his memoir ("A Doom of One's Own"?). Like David, this card becomes more powerful the more doom you add to it. Unlike David, it looks devilishly tricky to manage.

The advantages of the card are obvious. Unlike most Mystic attack cards, the Tome neither takes up an arcane slot nor relies on limited charges -- nor is it a one off event. The ability to fight with EITHER or opens the card up to more investigators, and may provide handy flexibility if you happen to be high on both stats (eg Norman Withers). And while the card is all about flirting with doom, you can always use it to plink an enemy for one damage and never add any doom at all -- maybe handy for finishing off an enemy you've softened up with Shrivelling. But of course, that's not what we're here for! We want to load this sucker up with doom and make as many +3 skill value, +3 damage attacks as we can. The problem, obviously, is that your scenario is going to be short-lived indeed if you simply binge-read the Abyssal Tome.

ABUSE IT 'N LOSE IT

The best way to work the Tome is to build it up and then get rid of it before the agenda advances. This can be done by playing another hand asset over it, sucking it back to your hand with Library Docent, discarding it with Dexter Drake's ability, or discarding it with some card like Sacrifice or Act of Desperation. If you want to keep it in play, Moonlight Ritual is there for you. Sounds easy enough: the problem is that it takes several turns to power up the Abyssal Tome. Even in an ideal situation, when you use the tome for the first time right after an agenda has advanced, and then use it the next two turns as well, you'd need the agenda to have a doom clock of at least 5 not to have advanced it early. And again, that's assuming you were able to use it every turn, no other doom appeared on the board, etc. In many if not most situations, you'll be looking to dispose of the tome before you've had a chance to fully charge it. Unless you're good at...

There are two ways I know of to get two doom on the Tome in a single turn. Knowledge is Power lets you trigger the ability for a free action without exhausting the Tome, allowing you to use it for an action later in your turn. That's nice, but the lady who really loves this tome is the Misses of Abysses herself, Abigail Foreman. In this situation, she's as good as a Knowledge is Power every turn. The first turn you use her, you're looking at two attacks for a total of 5 damage -- all for one action! If you use her the next turn as well, that's two Abyssal Missiles for a total of 8 damage. Unfortunately, Knowledge is Power and Abigail Foreman are both cards, and the latter is level 4. Plenty of investigators can take Abyssal Tome and Knowledge is Power: Daisy Walker, Gloria Goldberg, Jim Culver, Luke Robinson, Marie Lambeau, Norman Withers. But only one, Daisy, can take Abyssal Tome and Abigail Foreman.

Many other cards besides the Abyssal Tome itself have been discussed here, and that's kinda the point. It'll take some commitment to make this card work. For best results, you need cards to help you ditch the Tome before it advances the agenda, and other cards to help you pile multiple doom in a single turn. AND, since you've invested all those card spots in doom-management, you probably want to get full value by including other doom-hounds in the deck, like David Renfield, Arcane Initiate, and maybe De Vermis Mysteriis. This is the kind of card that comes close to dictating an entire deck.

Is it all worth it? Especially when you can just, say, use a pair of blessedly simple Shrivellings for your damage dealing needs? I'm inclined to think an elaborate Abyssal build would prove finicky. Finicky, but fun! The best reason to run this card may be that you just like roleplaying a mystic who is tapping into dark forces for extraordinary power, forces that may end up proving difficult to control...