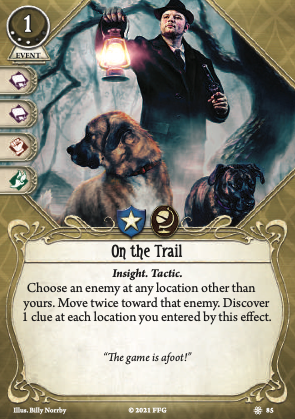 I feel like this is a stronger pick on the end than the one, since Seekers are gonna hoover up clues anyways and probably want to keep away from enemies depending on the build, whereas Guardians are going to appreciate the expedited move actions to get to the enemies, while also getting the added bonus of testless clues - especially for lower- Guardians.

Some stand out choices:

supertoasty · 32
Feels like a wonderful match for Zoey like you say. Plus it's a Tactic, making it Stick To The Plan-able... she can ensure it's on-hand when Smite The Wicked pops. — HanoverFist · 545 10/17/21
I think, it's not good in the hunch deck. Unplayable, if there are no enemies on other locations. Useless, if you are surrounded by locations without a clue. This makes it too situational for the random turn, you'll see it. The Insight trait is much more relevant for Farsight (or possibly "Cryptic Grimoire"). With them, Joe would like to take this card for his main deck, as he sure has some cards, that are already fast in the hunch deck. — Susumu · 234 11/20/21
Ups, the trait is irrelevant for Farsight, it works with any event. Somehow I thought, it also asks for Insights. — Susumu · 234 11/20/21
1

Absolutely a power card in a parallel Roland Banks deck - feels tailor made to the Red Tape and Seek the Truth directives.

Red Tape makes the entire thing fast, giving you a whole turn's worth of actions for a resource. If an enemy spawns somewhere and needs to be answered, you can be there without taking an action, hoovering up two clues on the way - and Seek the Truth will earn you a card draw and unlocks your skill cards at your final destination, provided the target enemy has a clue at their feet.

Then you've got three actions left to actually deal with the enemy, and really, few other fighters can get that much done in the course of just getting set up to shoot something.

The 3XP is a much easier sell for parallel Roland, too, with 5 bonus experience at deckbuilding - 8 if you're In the Thick of It, which you absolutely should be if you're running the other popular directive, Leave No Doubt, alongside a Delve or two.

Teag · 23
But even for parallell Roland it's awfully conditional. You need at least one location between you and an enemy, preferably two. And those locations better have clues on them; clues that you actually want to pick up. And to have enemies two locations away, you need a big enough map AND enemies with specific spawn instructions (such as cultists). Or you could, like masterfully split the party with this card in hand, but that's not exactly easy. I guess you could attach it to Stick to the Plan to make sure it's there when you need it - and to signal it's availability to your fellow investigators. — olahren · 2369 11/26/21