Fast. Play after you fail a skill test by 3 or less while attacking an enemy. 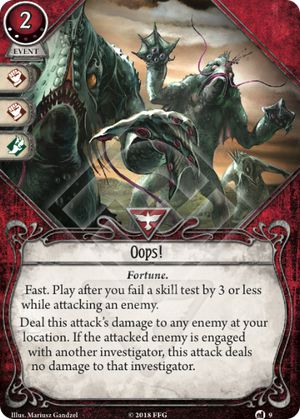 A great card, fairly costed in both resources and XP. This card gives a little glimpse of what the 0xp Oops! should have been, it was just missing that clause about friendly investigators.

The expanded failure range and "any enemy" clause in the text is what makes the card worth 2xp. No longer requiring 2+ foes at a single spot is a terrific enhancement, worth the 1xp. The expanded failure range means that you can attack a 3- foe and "automatically succeed", this is definitely worth the other point of XP since there is indeed a lot of 3 fight foes, bosses even.

The only disadvantage to Oops! compared to "Look what I found!" is the net benefit. "Look what I found!" turns an attempt to find just a single clue into twice as many clues obtained, Oops! nets you the 1-to-1 damage ratio of whatever you attacked with, so Oops!'s benefit becomes greater, the greater the base attack is. I'dd say to go and try it out with an Ornate Bow as Wendy Adams, or an Old Hunting Rifle as William Yorick, you will probably be pleased.

Having finished a 2-player run of RttFA with a Chainsaw Yorick deck in the combat specialist role, I have some opinions about this card. I had visions of getting to regain chainsaw supplies while still doing damage and reveling in Survivor BS. The level-0 version was a disappointment for all the reasons listed in that card's page -- it's a bit pricey for most survivor decks and you have to have a copy in hand, 2+ opponents at your location, and 2 resources available, and have failed by 2 or less for the thing to land. Now, RttFA hands out enemies like candy in most scenarios, so this was a likely setting, but it never really seemed like the right time. The card does have icons, and it mostly got used for them.

The upgraded version, which only requires one enemy, has a 3 or less failure threshold, and, importantly, protects fellow investigators from your clumsiness, looks like a better bet, but, at the end of the day, I only used it twice in the campaign (although the use in the final scenario was very clutch), so it wasn't really worth the 4XP to replace both. Maybe a one-of?

LivefromBenefitSt · 928
For Stella, it's a bonus action too! — MrGoldbee · 1301 11/8/20
Oh, def. This is a Yorick-specific review. Stella's action generation makes all the "fail to win" cards worth a close look. — LivefromBenefitSt · 928 11/8/20
This would have been a nice card for Yorick with Yaotl build but I agree that it is too situational to be a great card. One condition you left out was that the enemy needs to deal damage (vs some that only deal horror). And there are already plenty of 2Com icon cards that Yorick can use (Overpower, L2 Vicious Blow, L2 Shovel, AoD). — TWWaterfalls · 850 11/8/20
Yu redirect your own damage, not the enemy's, I don't think. — LivefromBenefitSt · 928 11/8/20
I made pretty good use of it in solo Rita. Turns out that you miss a lot when you're only fighting at 5 with the cleaver, but you don't usually miss by 3 or more. Also some combo potential with Live and Learn — Zinjanthropus · 212 11/9/20
It is the same. You redirect the damage that you would take from an enemy attack. So if an enemy only deals horror then their isn't anything to redirect. It might not be normal for an enemy to not deal damage but there seems to be an average of one (with multiples of that one sometimes) each scenario. There are just too many conditions for this useful in general though. — TWWaterfalls · 850 11/16/20
TWWaterfalls, Oops redirects the damage that you would have delivered during a failed attack that you made. It does not allow you redirect damage received from an enemy's attack. Visualize this: You swing an axe or fire a gun. "Ooops", you missed. Darn! The level 0 "Oops" allows you to deal that damage to a different enemy at that location. This level 2 version allows you to still deal the damage to the same enemy, even though you "oops"ed. I imagine that you were aiming for his head, and instead you got the enemy in the torso. Oops... oh well! Still a hit. :) — VanyelAshke · 169 12/27/20