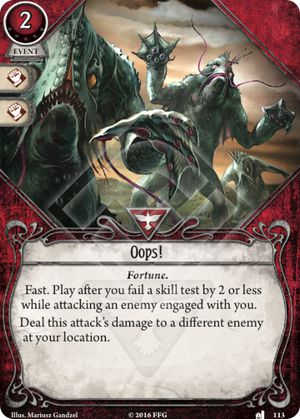 With the release of Heart of the Elders--and specifically the card Live and Learn--Oops!'s stock has definitely gone up. I'd seriously consider running this in a combat-oriented survivor deck over Overpower in a multiplayer setting now if I had to choose between the two. It's still a situational card, but pairing this with Live and Learn on a failed attack lets you damage another enemy at your location, then follow up immediately with a second, action-free attempt with a higher odds of success on your original target. This means you're potentially getting two damage-dealing attacks for one action. That's a serious tempo boost right there. And unlike previously suggested strategies using this card, with Live and Learn you can afford to take a swing at the bigger baddie knowing you're gonna get a second shot at it with a better chance of success if you fail.

Is this kind of combo going to line up every time? No, probably not. But it's a juicy enough proposition to warrant serious thought about running this card if you're building an investigator who'll be looking to knock some heads together.

Oops! isn't half bad when used as a skill card. It adds +2 Fight; a rarity among Survivor cards. There are neutral cards that do the same and more, but if you're playing multiplayer with a limited card pool (one core set for example) this card might be worth it just for skill checks.

As an event however, Oops! is all kinds of crappy. There's just so many condititions: First you need to fail the skill check by at least 2 points while attacking an enemy engaged with you, with another enemy present at your location and THEN you have to pay two resources to play it. Ouch!

Low-Fight Survivors such as "Ashcan" Pete can make use of it in certain situations ("Attack the mobster in order to kill the Whippoorwill") but that's still highly situational. Overpower will be better in almost every case.

One could argue that the Oops! event gets better if you play on Hard or Expert. The counter-argument is that you also need a more finely tuned deck at higher difficulties, leaving less room for situational cards like this.

Use Oops! to deal damage against enemies with: High value; Retaliate; Aloof; or who are engaged with another player. Engage with and attack another enemy with a lower Fight value (the ideal would be a Fight of 2, since it would be impossible to fail the attack by more than 2), without Retaliate, or who are not Aloof.

Do so without bonuses of s / icons, preferably using an attack with a natural Damage bonus (i.e. not one that depends on the attack being successful), and better still not using your investigator's better skill-values. Thus favourable choices (when available for the investigator's deck) are: Backstab; .32 Colt and Shrivelling [also Knuckleduster though this will result in the initial 'phoney' target doing its own Retaliate damage to you].

Since damage dealt by Oops! is not the result of an attack on the "target", failure now results in damaging the higher Fight-value enemy/bypassing its' Retaliate/avoiding risks of injuring another player already engaged with it.

This can be a directed tactic or merely to hedge bets facing multiple enemies. It is more practical cooperating with fellow players; and when your deck and/or that of a team-mate includes cards apt for bringing weaker and stronger enemies together and/or engaged with the attacker (e.g. Shortcut; "Let me handle this!"; On the Hunt; Taunt; Heroic Rescue).

Crispin · 3
For what it is worth, there also seems to be an interesting interaction between Fire Axe (which has a natural, resource-base damage bonus) and Oops. Still very situational since you could have used the 2 resources get +4 on your test vs main target. — Binoux · 15 4/23/18
The attack still counts as a failure, resolving effects approptitally. So you'd trigger retaliate and damage another investigatior, if the original attack targeted their enemy. — Django · 3435 4/27/18
Just retaliate; cannot be used except against an enemy engaged with you. But yeah. — CecilAlucardX · 8 4/28/18
Thanks, i didn't fully read the card before commenting. — Django · 3435 4/30/18
Thanks for pointing that out, I missed that too. — tylorlilley · 3 10/26/20