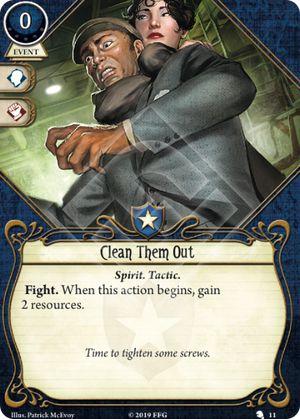 Preston stared at the so-called “prizefighter”. Sure, his father had taken him to boxing matches, but there was no way to make money like that, not like the market… He remembered lazy mornings when his maid brought in more coffee, going over the Arkham Advertiser, dawdingly over the business section. Much better than this "Mexico" business.

He was shaken from his reverie by a nearby cultist’s shouting. His adventuring companion was holding the oddball’s wallet with his left hand...and smashing him in the face with the right.

Brilliant if you have a high base stat and are doing lots of fighting anyway.

While I wouldnt replace Emergency Cache just yet, I can imagine taking this in a deck alongside Emergency Cache to buff up the finances of a deck. Imagine taking Stand Together as well, all of a suddent the faction is kinda rich, which is exactly what they've been needing for the longest time.

The case for not taking this is basicly the fact that failed actions can be a liability. If you'dd only be fighting at 4 while using this card then I absolutely dont see it as being a must-have.

This is a non-spectacular workhorse (well, it's spectacular in Nathaniel Cho) that will be a rather useful addition to many characters from now on.

Well hot damn; three things I was gonna do anyway rolled into one card. With no boosts to combat it'll take some work to pull off sometimes, but against the chaff of most scenarios this is just what you want. Besides, you can still chuck Overpower for it or Vicious Blow in a pinch, but that's a heftier expenditure.

I'm not sure it replaces Emergency Cache however. The primary usage of emergency cache is as your first action, then actions two and three complete your setup. On the other hand, emergency cache is pretty worthless drawn late in the scenario (in my experience), while this is still fantastic. Finally, the resources it grants aren't conditional on the attack; you get them even if you miss. Hell, you get them even before you attempt it, so if you have Physical Training or Keen Eye you can spend them immediately for benefit.