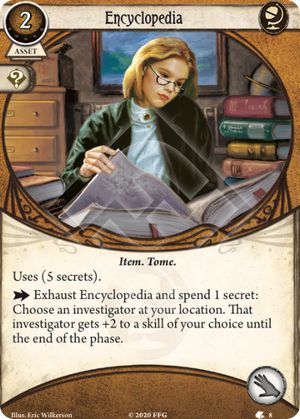 Much like the original, very nice in Daisy, with that extra tome action, less nice elsewhere, because an for +2, especially in a deck with endless card draw, isn't as good as a card with you can afford to toss on the test. Still. it's a nice bridge for Daisy to the 2XP version, perhaps with the Library Docent to reload it, and you can use Eldritch Sophist to move secrets around, which might be nice, since this is 5 secrets for relatively low cost.

LivefromBenefitSt · 887
I love it for multiplayer... giving another investigator +2 for each of their 3+ actions is totally worth a single action. I like this even better than the XP version, since nobody but Daisy is likely to use this more than 5 turns a game. — Hylianpuffball · 20 9/7/20
I find Daisy doesn't actually need the 2xp version anymore with stuff like truth from fiction and enraptured to refuel it. — molybdenum42 · 1 4/23/21
0

Im a fan of this card but in practice it's a bit of a downer.

(Daisy Walker exists, she can make any tome work, and this one isnt bad in her).

At 2 resources and some actions you get pretty big bonuses to a skill. If you target yourself you'll be getting +2 for, probably, 2 actions. If you target somebody else, it's 3 actions of fun! This card is a good way to supercharge a friendly fighter (How does that work? Are you reading a workout routine?) or power up a spellcaster ("You can do it, you have the power of Friendship!"), but because you only cash in on the buff twice yourself then it's of limited value to the user.

That said, upping your to 6 or 7 right before attempting to pick up from a 4 shroud isnt a bad idea, it's an option. But using it before making an attack means that your foe is getting an attack of opportunity, making it near-unusable in this manner.

This thing has 5 Secrets, there are implications there, and I think Amanda Sharpe might find it a helpful way to brute-force through a round where her skill cards didnt co-operate.

Try it, it'll probably be mildly useful but not groundbreaking. Frankly I love the fact that it has the same effect as the XP version but limits it with secrets, so it's just as powerful, but limited. I want to see more stuff like this.