After you commit Daredevil to a skill test, discard cards from the top of your deck until you discard a skill you can commit to this test. Commit it. Shuffle each weakness that was discarded by this effect back into your deck.

"You're a maniac, Wini!"
"I know! Isn't it wonderful?"
Borja Pindado
Winifred Habbamock #18. 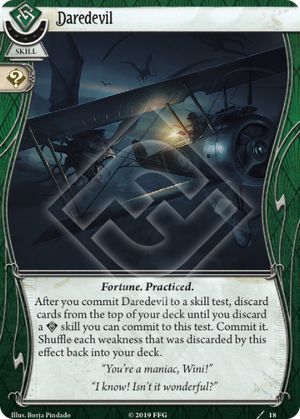 So, the 0 Exp version of the card allows us to discard our whole deck except weakness cards in case it's the only rogue skill card we play. To what purpose? Live fast and die young? Probably. But we can think about some shenanigans like playing improvised stuff that will replenish our now very thin deck afterwards: Improvised Weapon, Winging It, Impromptu Barrier. Other interesting options are A Glimmer of Hope and Miss Doyle's cat's (Augur, Hope, Zeal). Of course reaching 1 lonely card in the deck is extremely difficult. Daredevil has the right trait for Practice Makes Perfect, and of course is good target for No Stone Unturned. Mixing so many classes seems impossible, so maybe if we want to play Daredevil in this evil way we should look at Versatile. Another option is to play Survivor/Rogue, bring enough beers to our boardgame afternoon and ask for help to our fellow seeker player. Just promise eternal friendship to our drunk teacher in exchange for his No Stone Unturned.

Matamagos · 4
This could be a good way for Wendy to get into Amulet-recursion-shenanigans-range. More efficient than trying to draw through your deck with Lucky Cigarette Case and Pickpocketing. — Zinjanthropus · 171 8/2/20
Could also be interesting as a form of pseudo-draw for Parallel Skids if he's planning on playing A Chance Encounter (2) and Double Double + Scrounge. Also his Elder Sign. — Zinjanthropus · 171 8/28/20
I believe the drawing cards rules state that "When a player draws two or more cards as the result of a single ability or game step, those cards are drawn simultaneously. If a deck empties middraw, reset the deck and complete the draw." So actually- you just keep drawing until you die from sanity damage — masterearth · 1 12/16/20
Playing this card as your only rogue card:Instant death because in theory you will discard forever :D — Makaramus · 4 12/22/20
that would be true if it were drawing cards, but discard doesn't work that way. when the deck runs out of cards you stop discarding. if you haven't found a target it just whiffs — Zinjanthropus · 171 12/28/20
2

Since the single card cannot be shuffled into empty deck (FAQ 1.13), this card can be used as pseudo-Flux.

In this case, make sure that...

elkeinkrad · 195
I believe the drawing cards rules state that "When a player draws two or more cards as the result of a single ability or game step, those cards are drawn simultaneously. If a deck empties middraw, reset the deck and complete the draw." — masterearth · 1 12/16/20
It's not draw though - it's discard. Elkienkrad is correct. — Eggzavier · 1 3/18/21
2

I wrote a question to FFG's official rules forum.

Q: What would happen when I commit card like Daredevil or Copycat to another player at my location? Will the cards see no legal targets for the "after" ability since you can only commit 1 card to another player per skill test and I have already committed the Daredevil/Copycat as the one card? The other way I see it is that it lets you commit another card through the ability because of the Golden Rule. If that is the case does the same work for cards like Practice Makes Perfect or Butterfly Effect?

A: The rules permit each investigator to only commit 1 card to a skill test performed by another investigator. However, investigators may use card effects to commit more than 1 card in this way. In other words, the rules permit only 1 card to be committed, but it’s not a hard maximum. If you commit something like Daredevil with your 1 allowed committed card, you may use Daredevil’s ability to then commit a second card, and that is totally legal. Same goes for any other effect that instructs you to commit 1 or more cards.

nikee40 · 3
Indeed. There's no rule saying you can't commit more than one card to a skill test by another investigator, it's just that *some* effect has to permit you to commit a card and the framework step itself only lets you commit one. — Thatwasademo · 39 8/29/21
This is very useful for Winnifred, since she can draw a card after committing Daredevil or Copycat to another player's test (provided those skills' effect finds a target). — Thatwasademo · 39 8/29/21