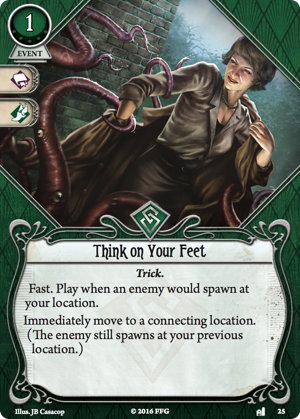 Like Shortcut, this card is fast, so you can change your location without provoking attacks of opportunity, if you're already engaged with another enemy. This card can be used together with Elusive, to setup up enemies for Dynamite Blast.

I am just adding my review to Django's, because of a linguistic feature in the German translation of this card. German players, please beware that FFG translated "spawn" with an unspecific term (~"appear") and that Think on Your Feet does not work on enemies who just moved to your location.

Think on your Feet is pretty similar to Elusive. It takes a bit of finesse to use, you want to make sure you are ending as few turns as possible in locations you want to spend more time at. In the ideal application, this event moves you to a better location and spares you multiple actions dealing with the spawned monster. If you are unarmed and draw a monster, you can play Think on Your Feet to step away, which gives you one whole round to properly prepare for fighting.

The benefit of this cards mainly depends on the scenario goal and the player count. In solo play or with 2 players this is a close to mandatory include for Jenny and Wendy, who both prefer to not habitually fight every last enemy that spawns on them. In larger groups, you stick together more, and more often you want to stay and, depending on your role, help fighting/tanking enemies, so your specialised buddies get freed up.

A small explanation of Think On Your Feet timing could be helpful for Lola players. Her innate free triggered ability may be triggered as a player ability during any player window. The first player window during the Mythos Phase would be after Step 1.4 Each investigator draws 1 encounter card. Since the triggering condition on Think On Your Feet begins with the word "when...", it may be used after the specified triggering condition (an enemy is about to spawn) initiates, but before its impact upon the game state resolves. In other words: there is typically no opportunity to switch roles while you are drawing encounter cards from the encounter deck, so she’d have to switch to Rogue sometime before the Mythos phase in order to play Think On Your Feet. But whenever there is a skill test, (e.g. if by chance another player draws a treachery card before Lola,) Player Windows open up before and after cards are committed to the skill test (as depicted on RR page 26). So Lola could switch to Rogue during that time.

Synisill · 742
Regarding "recommendations", i think you linked the wrong "zealot" in your second spoiler? For the one that i think you mean, you must pass an evasion attempt, not just leave her location. Disengaging also does not work, to add her to the victory display. — Django · 3616 6/17/17
You mean Ruth? No, i really meant this "GP" i linked. I refer to the following situation: "GP" appears, you play Think on Your Feet and go directly to the zealot "LC". — Synisill · 742 6/17/17