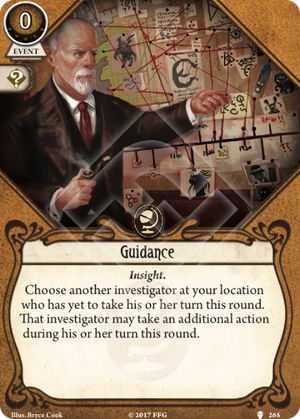 I've run this card a few times now in a Rex deck, and I have to say that it impresses more often than it disappoints.

I agree with an earlier reviewer that stated this card might as well read "You lose an action, another investigator gains an action" because that's effectively what this card does. But it also gives options.

I tend to play the dedicated clue sniffer on my team, and there are occasional rounds where another investigator (usually the combat monster) is trying to optimise a turn, but just needs one more action to pull it off. Or, for some reason, sniffing clues isn't needed for one particular turn, and Rex Murphy can't contribute what the team needs. This card can be used to shift one of your actions to an investigator who can put it to better use.

There's also the icon on the card, which can come in handy in the worst cases of scenarios... but at that point, you're probably in trouble.

I find that I tend to want five cards sitting in my hand anyway, to enable Higher Education, and the perfect candidates for those five are cards that are fine sitting in my hand until a situation occurs where they're exceptional. This, plus two copies of Delve Too Deep, gets me over half way there!

For a 0xp card, this one fits the bill.

(NOTE: The above review is based on Rex Murphy, in 2 or 3 player games, on Easy/Normal difficulty, YMMV.)

cb42 · 23
But remember that there are a lot of other things you can do with your actions that can be more powerful. Shortcut, for example, can donate an action to another investigator without costing yourself one. Or you could play a card like I've Got a Plan! to help fight yourself, which is a way more powerful use of an action. — CaiusDrewart · 1846 11/8/18
Just generally, it is true that sometimes there aren't any clues to be found but there are other priorities on the board, but the Seeker card pool has a lot of other options for those situations which are far more powerful and efficient than Guidance (which is just a fundamentally inefficient card.) And of course, in all the situations where there are clues to be found (which is most of the time), Guidance is just awful, as the most important and efficient investigator is forfeiting cards and actions. — CaiusDrewart · 1846 11/8/18
One more thought: you mention a possible synergy here with Higher Education, in that Higher Education allows you to have very situational cards in your hand. (Though you still want those cards to be as useful and powerful as possible, obviously). Fair enough. But another effect Higher Education has is that it makes "take a resource" actions actually quite reasonable. This means that donating your actions to other investigators becomes even less appealing if you have that card in play. — CaiusDrewart · 1846 11/8/18
@CaiusDrewart I've used I've Got a Plan! previously, but I've found the card sits in my hand, wasted, more often than not. It's quite expensive, and I'm often not the best choice to fight. I've played it, auto-failed the test, then had to use my second and third actions trying an inefficient evasion. Regardless, I'm not saying Guidance is an excellent card, just that when I draw it, I more often think "now we have options up our sleeve" than "Damn, I wish I'd drawn something else." So I just thought I'd post a positive-ish review. — cb42 · 23 11/9/18
@cb42 I agree with you. There are situations, especially towards the end of a scenario, where any action that you could take is less valuable than providing an extra action to another investigator. I feel this is especially true with Rex given how efficient he is at gathering clue; he does his job so well that he can afford give one or two of his actions to another investigator. — FractalMind · 22 11/10/18
@FractalMind: That logic doesn't make much sense to me. Rex's actions are so amazing that he should... forfeit them? — CaiusDrewart · 1846 11/11/18
@CaiusDrewart It’s not about being ‘amazing’ in a universal sense. It’s that his actions are efficient and Rex hyperspeciallizes well. But no matter how much you specialize in gathering clues, there’s usually a set number of clues to get, so passing off an action to another specialist can be worthwhile when you have time to get all the clues. I do agree that 9 times out of 10, shortcut does what you needed out of Guidance and better. — Death by Chocolate · 415 11/11/18
@Death by Chocolate You nailed it. I do agree that Shortcut, in most cases, is better except when the other investigator could use an extra action for an attack. What would make the card more useful is you could give the action to any investigator regardless of their location. Maybe an idea for an upgraded Guidance??? — FractalMind · 22 11/12/18
2

Guidance isn't a card that generates anything, it just moves one action from you, to another player, and it costs a card. This is basically a card that lets you give the monster killer an extra attack action in place of your investigative actions. It's quite useful actually, when the going gets tough and your friend is just drowning in monster guts you can give them the leeway that can be the difference between dealing 6 damage in a round and dealing 8, or just more securely landing those first 6.

Guidance is a fight card, it's pretty cool because instead of having to equip a system of combat tools yourself, the booster talent and ally boosts and weapon and so on and on, you just tap into all the pent up power that someone else is working hard to foster.

So why don't people like it that much? Its a -low priority- use for a card slot, seriously between the "upgrade quests" which pretty much all the seekers take all the time and the clue tools, clue cheats and card draw and the few real good support cards, yeah you get it. SPACE, it's not infinite at all!

Let me tell you this: Guidance is not a bad card, in higher player counts actually I've got to say, it can be terrific! It can mean that a gets to move before emptying a whole clip of Lightning Gun at something! In 2 player its quite helpful when the team organisation is: Fighter & Cluever. It's definitely best in team comps where your friends can muster high-value actions, that mention of Lightning Gun is by no means an accident.

This card actually says: You lose an action. Other investigator may take an additional action.

Well i don't know if this is good or bad card to include it to your deck. As a seeker in multiplayer you need every action to gather those clues so i'm kinda meh...

Uncle George the Farmer · 7748
I am not a fan, myself. Maybe sometimes another investigator's action will be way more valuable than yours would have been (although, as you said, Seekers have some of the most efficient actions in the game), but so much so as to justify spending deck space on this? I don't think so. — CaiusDrewart · 1846 4/18/18
As a level 0 card, it can be included in non-seeker decks, which is probably its best use. However, the dunwich 'gators probably have cards they need more, and as Roland you can include better seeker cards anyway. I can't think of anyone else who can take it? — SGPrometheus · 255 4/20/18
Some seekers/builds are done for support. This gives you flexibility by allowing non-seekers extra time to fight/evade/pick locks. Roland can use it when there are no monsters around to let seekers nom clues. Lola can use it but I kinda see it less useful there. — CecilAlucardX · 4 4/28/18
Corner case: Use on any survivor with will to survive . Or on lola nova with 10+ actions and will to survive. lola + 3 seekers would give her 16 actions for 1 turn. — Django · 2798 4/30/18
I think it's a decent ability, just probably not worth a card slot. A higher-exp version might be worth it some day though. If it had 2 ?? icons, i could definitely see myself using it at 1 exp. — dr00 · 5 6/7/18
It's much worse than the above. It is you lose TWO actions, your friend gains ONE action. (ie, it is a virtual-action to draw the card). It's not a case of "is this every useful?", sometimes it will be, the question is "will this almost always be usefu — duke_loves_biscuits · 696 7/14/18
1

Let’s say you have Farsight. Use that to play a free event every round. You choose this. Free team action! I’ve taken a few minutes to give you guidance, but now you can take an effective action and take this old classic out of the binder.

This card is great in rogue because you can give your bonus actions to someone else who can actually make good use out of them.

I built a teamwork/guidance based Jenny deck based around this concept, haven't tried it out yet but hopefully it works out alright. You could also use this out of Finn I guess.