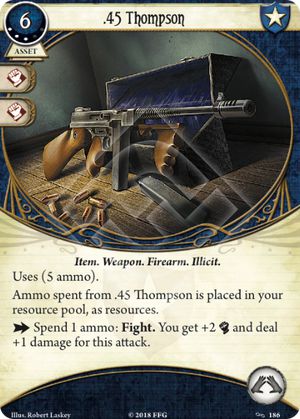 .45 Thompson is, as another reviewer put it. The Dr. Milan Christopher of weapons. Talk about nailing it!

The thing that .45 Thompson does is create an extended capacity combat option with a large +, it is really good in the hands of dedicated fighters and 3 characters who grab it to keep their attack bonus high.

As a weapon that pays for itself, it makes extended combat even easier! You can battle it out for rounds on end, you can use the extra cash to fuel hits via talent use like Physical Training or Keen Eye and/or the cash will let you keep the ball rolling by helping pay for the next gun. .45 Thompson is a good enough card in of itself to warrant a deck slot in dedicated fight builds, the kind of builds that shoulder the burden of taking on every single enemy that spawns.

In faction cards that synergize:

One important bit: You dont actually need all of those other cards, .45 Thompson by itself is a grease card thank makes your deck run more smoothly in it's enemy killing role, it doesn't need any combos to actually be good on its own.

Tsuruki23 · 2119
Yeah, Mark using this plus Act of Desperation is crazy good. Honestly it’s so consistent that I can see many fighters taking it before Lightning Gun or anything like that. — StyxTBeuford · 12595 8/19/19
Is it better than Lightning Gun or Flamethrower though? Perhaps if you play Solo it may be but in multiplayer (if you are the main enemy killer) the unmatched consistency and one-shot potential of the 3-4 damage per bullet weapons seems superior to me, specially on higher difficulties. Stil this is a fun card to play and build around. — Alogon · 780 8/19/19
I think at least with AoD it’s a stronger choice than Lightning Gun. 5 shots at consistent 2 damage for Mark at 7 combat before any other boosts, then AoD for +6 and 2 damage and a bunch of resources. Play alongside expensive damage assets like Dynamite and Beat Cop. It sets up the economy you need when you do get Lightning Gun later, and soreading 5 shots at 2 is usually better than 3 shots at 3 in early scenarios. — StyxTBeuford · 12595 8/19/19
*so doing. That was a weird autocorrect. — StyxTBeuford · 12595 8/19/19
Sure you can play it like that if you are using your big guns as dispensable 3-4 shot assets, but if you plan to run the infinite ammo synergy (which is the most efficient-economical build for the late campaign), namely (Venturer + Extra Ammunition + Stick to the Plan + Custom Ammunition (1 copy) + Contraband (if anyone has acces to it), then you usually can't run the Thompson(3) for XP reasons. If you get this early you are exchanging your late campaign potential for a slightly better deck for the 3rd and 4th scenario. — Alogon · 780 8/20/19
Maybe, but I think it's worth noting that having a better gun earlier might also make your XP gain more consistent. Leo could also take Charon's Obol. And even as a non combo just having something like Contraband 1 and Venturer goes a long way, and Stick to the Plan is great but not essential in my honest opinion. — StyxTBeuford · 12595 8/20/19
Excuse me, Contraband 2* — StyxTBeuford · 12595 8/20/19
The argument between upgraded .45 and Lightning gun is a moot argument, the 2 guns serve different roles. 1 is the butcherer gun, that makes short work of all the little things you need to mulch in a map. The other is the monster killer, there really isnt any comparison between them and frankly, having both in 1 deck is perfectly effective! — Tsuruki23 · 2119 8/26/19
Right, like I said, you can take the Thompson early for less XP and to deal with less horrible threats in beginning scenarios, then you can take Lightning Gun later alongside it. The Thompson is great because it keeps you refreshed (and with AoD actually makes you money) for other big guns like LG and Flamethrower. — StyxTBeuford · 12595 8/29/19
3

This upgrade (featuring more bullets in the artwork than the original) seems like it might be the real reason why Sleight of Hand made it onto the mutated list of taboos.

By itself, we now have a quality +2 weapon that will almost pay for itself over its 5 shots. This lets us use it early in a scenario to wipe up mooks without losing tempo in the long run, and those click savings mean it can get seamlessly replaced later on for a boss-killer gun.

An obvious combo with Venturer means that the ally essentially ends up costing 1 resource (0 in Leo). Likewise it turns Extra Ammunition (from under Stick to the Plan) into even more resources. It also turns on Bandolier in case you're Roland Banks with a couple Hawk-Eye Folding Camera or something.

This is the Dr. Milan Christopher of weapons. That should speak volumes...