After you discover 1 or more clues at a location with an enemy: Either discover 1 additional clue at that location, or automatically evade that enemy. (Limit once per round.)

effect: +2. If this is an investigation, you may choose any revealed location; you are now investigating as if you were at that location instead. 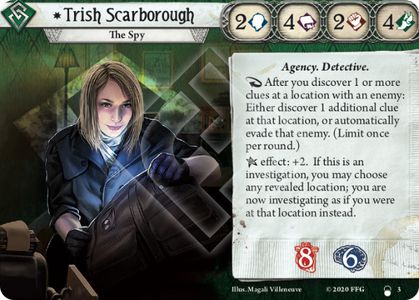 Deckbuilding Requirements (do not count toward deck size): In the Shadows, Shadow Agents, 1 random basic weakness.

Trish had always excelled in both body and mind, her unwavering focus on excellence and her fearless disposition a winning combination. Given her stellar academic and athletic records, everyone expected to see her become something great. Instead, Trish took a job at a commercial code company. The initial shock of her humble work eventually wore off, and the exceptional Trish Scarborough faded into obscurity. This suited Trish just fine, as it made it harder for anyone to realize the truth: her job was a cover for her true work as a spy with the Black Chamber, the Bureau's code-breaking agency. 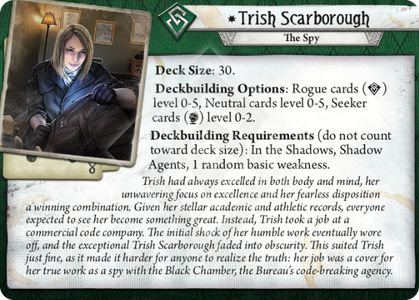 Колодостроение
Search for cards usable by this investigator
Reviews
11

Ask your friendly neighborhood guardian to leave a Handcuffed enemy for you, so trish can engage it and use her ability all day.

You could help them find it with Eureka!, No Stone Unturned, the new Scrolls of Secrets....

Trish Scarborough is a green/yellow investigator and is equally good at both. Her ability is the best evasion ability in the game. No other character can exhaust an elder God with two bucks and zero actions by working a hunch. (She also gets a clue.)

And when she gets a few XP, money and clues pour from the sky. Lockpicks and Gregory means you’re starting at a +8 to get clues. If you have Lola Santiago too, you start at a +10. Plus, Lola’s fast ability means that if you have resources equal to the shroud location of where you are, You don’t have to worry about enemies spawning on you during the encounter phase. Your guardians will love you.

Her signature weakness is something your allies can deal with, or you can just see it as a two health speedbump. If you have Obfuscation, for two bucks and zero actions you can avoid even that consequence.

And if you want to play guardian angel, you can use “In the know” to leave enemies tapped all across the map.

Two willpower won’t get you far. Hopefully other people are there to deal with such petty trivialities as the encounter deck. If not, do yourself a favor and grab Quick Study. It’s always nice to have a few clues scattered around, anyway.

MrGoldbee · 1082
From what I understand about AoO timing, though, wouldn't the automatic evasion almost always be preceded by an attack of opportunity? Since investigating would trigger the attack before any clues are actually discovered. — TheDoc37 · 454 11/6/20
Having said that, I can see many different niche scenarios where you can either remotely investigate, investigate while someone ELSE is engaged with the enemy, or discover clues without an action. My friend plans on playing her for our next campaign, so we'll just have to see how many times these niche cases occur.... — TheDoc37 · 454 11/6/20
She is in my oppinion a made match for Stealth especially the xp version. It allows you a free disengage, leaves you free to investigate and disable the enemy after the fact. She obviously also works well with any free investigate or auto-collect trigger.. — Skeith · 1571 11/7/20
Question regarding her ability: If I am in a room with an enemy that is engaged with another investigator, can I use her ability to exhaust that enemy even if it is not engaged to her or am I left with only the "discover 1 additional clue at that location" part of her ability? — Big_Daddy_Rod · 1 4/13/21
That's the same question I came here for. I'll try to answer myself: the effect only asks that the enemy must be in your location. It doesn't require it to be engaged with you. So you can evade it (that is, exhaust it and disengage it from the engaged investigator, if any) even if it's not engaged with you. — Vittek · 1 4/17/21
Are you sure of this Vittek? I would think this would be not be legit rules-wise as quote "Unlike the fight and engage action, an investigator can only perform an evade action against an enemy engaged with him or her." I know this is an "automatic" evade, but I think it doesn't change this general rule for evading. — TomLady · 8 4/21/21
But yes, collecting an extra clue instead if there's another investigator currently engaged with an enemy would certainly work. — TomLady · 8 4/21/21
Regarding evading enemies engaged with another investigator: Yes, that works, at least per the ruling for Stray Cat. — itsthewoo · 1 5/7/21
But please see #decoy. It says that: "Automatically evade a non-Elite enemy at your location." So is it ok for me to evade an enemy which is already engaged with another investigator but in the same place with me? — aluminum · 1 7/7/21
Decoy's wording is the exact same as Stray Cat, so yes the same idea applies: you exhaust the enemy and break its engagement without a skill test. — TheDoc37 · 454 7/18/21