As an additional cost to play Faustian Bargain, add 2 tokens to the chaos bag.

Investigators at your location gain a total of 5 resources, distributed as you wish. 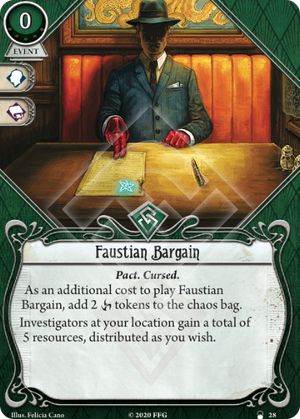 I really like this card. I've tried it in Wini through TCU this week -- it's been great.

2 -2 tokens are not really very much to someone who plans to overcommit anyway, and sating her thirst for resources is really nice. It's an extra Cache (but better!) and given her signature weakness you could even try and sag a test tactically if the opportunity comes along on a WP treachery etc.

The fact it comes with WP and Int icons is even better, though at 0 cost I can't imagine not playing this except in a pinch.

fiatluxia · 50
I think I like this a lot for poor Preston builds that try and spend all their resources every turn. A big issue with those decks is mitigating Lodge Debts, but this essentially kills Lodge Debts for you, as you use the 1 resource you gain at the end of a round +4 onto Inheritance, and this gets you the last 5. — StyxTBeuford · 12722 10/5/20
5

I think this card having icons is a mistake, faustian bargain is by most accounts a very strong card, like obscenely strong, it makes its way into almost every deck I make even if team mates don't want curses the idea of gaining 5 resources from me is too tempting.

That said the idea that when you are fully set up and you can afford to not play this card and keep the curses at bay you don't even have to consider this a dead card, will and intellect tests are endlessly being made so you will just commit this in the late game, I feel like that's a mistake, can you just say no to the bargain and go on with your life?

Like any true evil bargain it should be there....tempting you, begging you to play it "its only two curses...come on, you can handle that can't you.... and you need the money, what if you draw something expensive and need it out fast?"

Like all cards that channel dark forces, faustian bargain proves there is a reason the good guys are always on the back foot, evil just get the best toys.

Zerogrim · 255
Yeah but sometimes you have money — MrGoldbee · 1265 8/15/21
Also Crystallizer of Dreams — StyxTBeuford · 12722 8/15/21
I think you're exposing a long trend over the past few years of the game's design, which is from the cards themselves being "mean" to the cards being "nice." For instance, the Gold Pocket Watch takes your accessory slot. It's an incredible card, but for all the investment you already put into it, forcing you to either invest more for Relic Hunter or play around your big accessory is definitely a little bit mean. I don't mind it, but there has been a slight tonal shift toward "niceness" over the game's lifespan. — SGPrometheus · 658 8/17/21
5

I am excited to try this card in a Dark Horse deck. It is another event that can get you up from 0 to a lot at the start of the turn, to then be able to play some important assets or dump money into a Fire Axe or the new Mariner's Compass.

Cpt_nice · 70
A nice feature of this card in such a build is that you can choose exactly how many resources you get, and can give the rest away to another player, making it that much easier to get back down to zero. — Trinity_ · 185 12/5/20