Playing Sword Cane does not provoke attacks of opportunity.

After Sword Cane enters play: Immediately trigger its "" ability without paying its cost.

Exhaust Sword Cane: Fight/Evade. You may use your in place of your or for this attack or evasion attempt. 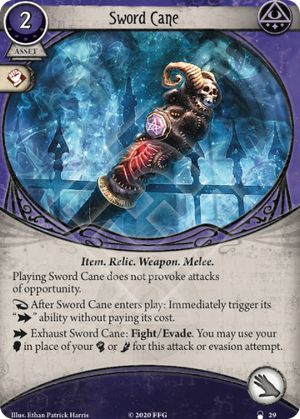 The previous reviews of this card have held up pretty well, but I wanted to add a few thoughts after months of playing with Sword Cane. It deserves the attention. I think we can now say that this unassuming little card has proven itself as a Mystic staple.

You can tell the designers had Dexter Drake in mind thematically and mechanically with this design. Sword Cane is indeed particularly good for him, but I think this card is excellent in vast majority of Mystic decks.

The most time-honored and traditionally effective way to play a Mystic is to stack a ton of Willpower boosts and try to use Willpower to do basically everything. As it turns out, Sword Cane just fits perfectly into that strategy. It lets you replace not one but two stats with Willpower, on a permanent basis, for a very low cost. That's so good!

Sword Cane's most powerful feature is that it lets you evade with Willpower. Its effect here is very comparable to Mists of R'lyeh. There are some differences--Sword Cane exhausts (but not on its enters-play trigger!), doesn't use charges, doesn't have the minor added bonus and penalty, etc. Basically, though, the cards accomplish the same task. Yet the biggest difference by far is that Sword Cane doesn't take up a hotly contested Arcane slot. Previously, running an evade spell on a Mystic meant either sacrificing an investigation or fight spell (an enormous price to pay) or running some clunky do-nothing asset like Sign Magick. Sword Cane totally gets around this. Hand slots are not at a premium for low-level Mystics. (Sure, you might want your Taboo'd Scroll of Secrets, but it's no problem to run that alongside Sword Cane.)

Sword Cane's Fight ability is much less powerful since a basic Fight action is much worse than a basic Evade action. The exhaustion clause is also much more relevant here--most enemies need to be evaded just once, but will take more than one hit to be killed. So, this won't adequately replace a combat spell. But that's fine, because you have your Arcane slots for that. And Sword Cane's ability is still really useful. It will save you charges on your main combat spell by taking out weak enemies like Swarm of Rats and Acolytes, or dealing that last point of damage to odd-health enemies. This is why some people like to run Wither as a supplement to Shrivelling. I always hated doing that, myself, because of the Arcane Slot issues and because Wither is so weak on its own. Sword Cane gives you all the benefits of this without any of the problems. It's a really nice effect to get stapled onto what was already a playable card.

Remember that it's usually better not to play Sword Cane prophylactically. This is because you get a free activation that doesn't exhaust Sword Cane when you first play it, so better to wait until you actually want to use it. Plus, if you end up never needing it, you won't have wasted the resources. There are exceptions, of course: maybe you want to protect your other assets from the encounter deck, or maybe you're Patrice and don't really have a choice.

To sum up, I'd say that if evasion is central to your strategy (maybe you're playing TFA or something), then you may still want to look at higher-level evade spells like Mists of R'lyeh IV for that big bonus to the evade check. But if you're a more typical Mystic that likes having the flexibility to evade, but only every once in a while, I think Sword Cane is substantially better than the various evasion spells and events. You're paying less and getting more.

I'll be honest, from a thematic perspective it feels a little silly that all my Mystics nowadays are venturing out to fight cosmic horror with Sword Canes in tow. But what can I say? This card just gets the job done.

This is a very good card and only gets better the higher one's willpower stat. While it lacks attack bonuses, damage bonuses and further, requires exhausting to use, its best feature is that it uses a hand slot, instead of an arcane slot. While Wither has a similar function, it does compete with other spells for precious slots.

It is relatively inexpensive and ideal for fighting odd-number health enemies, when an early game Shrivelling or Azure Flame charge would either be overkill, or underkill. Saving a charge to finish off 1/3/5 health enemies will also extend the life of those spells.

It also allows evading, with one's willpower stat, ad infinitum. Great for mystics whose hands aren't already occupied by Trumpets, Statues, Stones or Flashlights. And as if all that wasn't enough, unlike the eldritch equivalents, this mundane weapon has no downsides for drawing special tokens. 5 will investigators like Dexter, Agnes and Akachi, often with further passive bonuses, will get a lot of mileage from this card as a backup weapon/evasion tool. And it doesn't use an arcane slot!

A much, much cheaper alternative to Sign Magick. Not only does it cost one less resource, you also don't have to spend the resources and action playing the spell you just made room for. And because of its reaction ability and the fact that it doesn't provoke AoO, it's effectively fast if you only play it when you need its effect. This is a card that has so much convenience going on that, if this were a competitive game, it would be considered broken. We'll see how it plays out in practice, but it's very appealing for decks that can take it.

Who benefits most? Mystics like Akachi and Agnes, at 5 will, can use it to replace events that allowed them to fight or evade when their spell slots were full. Mystics whose will is closer to their other stats see less of a benefit, but still might like that third-slot versatility. For non-Mystics, who has the will to make it work? Parallel front Daisy with original back can pump her will to awesome proportions, but that fills her hand slots. Carolyn might actually be the non-Mystic who gets the most from it, as she has decent will and generally free hand slots. It allows her to evade cultists and pick off rats which she normally can't do herself, so it's pretty useful for her too.

Very compact card, performing a lot of functions. Interested to see this in action.

SGPrometheus · 569
Note that it isn't just 'pseudo-fast' if you play it the turn you need its effect, but it also doesn't exhaust, so you can use it twice during that first turn. It is also better than fast in the sense that its bonus stacks with Sleight of Hand and Dexter Drake's ability. — Death by Chocolate · 913 9/4/20
You could take it in Ursula to help with her abysimal combat score, although "evade and run" is a better strategy for her 9 times out of 10. Maybe she could have Elli Horowitz hold this while Ursula was reloading her bow? — LivefromBenefitSt · 755 9/17/20
2

My first impression was the same as SGPrometheus'. Isn't this card kinda broken? I mean, mystics have all kinds of ways to use their will stat in place of others, but this single, level 0 asset let's them (for most intents and purposes) replace TWO stats with will. And it does it on the cheap. And it does it with great action efficiency. But then I thought to myself, how many mystics are going to be running neither a combat nor an evade spell? Because if you have, say, Mists of R'lyeh in your deck, or Shrivelling, or any number of such cards, then only half of the Sword Cane's effect matters to you -- unless you're taking it as a backup card until you find your main tool. Now it seems less attractive... I think it still has a place, but a narrower one. If you are a mystic using your two arcane slots for spells that neither fight nor evade, then this is a lovely little trick to have up your sleeve. It lets you do a bit of fighting and evading, enough to get you out of a pickle, while you focus on investigating or scrying or whatever it is you do. If you are a mystic who likes to mix it up with the baddies, chances are you're packing heat that, when you put it on the board, will make the sword cane largely a dead draw.

Mordenlordgrandison · 322
Having a reasonably reliable way to deal 1 damage is a good way to save charges on your 2 dmg spells mid game when three health enemies are common, but it also means you have a decent escape mechanic to evade non hunter enemies and bugger off. It could save you a fair few charges and actions in the long run. Is it broken? Not so sure. Is it worth playing with high will characters? Most likely. — Vathar · 1 10/10/20
I would consider this as a backup option for Mystics that are packing a big combat spell as well as an option to deal the odd point of damage save charges or to do a simple evade and not need to include an evasion spell. The multifunctional and versatile aspect of this card is outstanding. — TWWaterfalls · 775 11/23/20
I agree with the comments here about getting that last point of damage in. When I played combat Diana, her knife was great for that. — PanicMoon · 2 11/26/20
2

This is, undisputably, the best card in Innsmouth. Yes it's "weaker" than some of the 4+ xp cards, but seriously, the safety, speed, flexibility, this card does sooooo much work that you're straight up spoilt for choice.

Second. It evades. Getting away from a Hunting Nightgaunt or similarly large monsters or unwinnable fights is key, to buy time for when you can actually beat them later. Or just to conserve other fight resources.

Third, it's responsive. The round that you play this thing you get extra power! For that one turn you can do 2 damage if you attack twice, evade 2 enemies, or get two chances to do one of those things once.

Lastly, there's combos! Dexter Drake has that innate ability to play it as a free action, effectively netting a free action attack/evade, there's also Sleight of Hand which can do the same.

All in all, this card is so good that I frankly question any deck for a 5 that doesnt include this thing.