Fast. Play during any window, or at the start of the round. 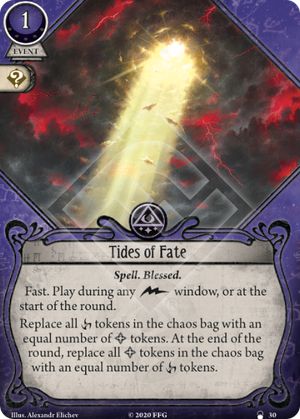 Definitely has its merits IF you can pair it correctly.

I mean, maybe you could play this on its own as some sort of one-round Hail Mary where you don't have to fear all the curse tokens you ended up sinking into the bag, like some kind of weird, reversed Will to Survive, but then you have to deal with the fact that ALL of your blessed tokens are corrupted back to curse tokens, and NOT just the ones you initially converted.

However, even with just the base box, it really doesn't seem hard to fill the bag with curse tokens (Faustian Bargain, Deep Knowledge, Promise of Power, etc.), so I do think this can work really well as a combo card with cards that would spend bless tokens from the bag, maybe curse tokens if you're willing to wipe the bag of bless tokens. As of this review, only the base Innsmouth box has been released, so the only good combos I can think of is 1.) playing this immediately before playing Rite of Sanctification, especially if you pulled a nastily timed Crisis of Faith as Sister Mary, and 2.) use the Cryptic Grimoire's second action after the round ends if the curse+bless tokens in the bag = 10+ beforehand.

But honestly, I wouldn't be surprised if there are more cards that require large costs of bless (or curse) tokens down the line, so I'm anticipating seeing even more use for this in the completed campaign. If you think of any more combos (now or in the future), share them in the comments!

TheDoc37 · 455
Do it on the turn you fight the boss. — MrGoldbee · 1120 10/4/20
What happens when there’s 10 bless and 5 curse left at the end of the round? Will 5 bless remain or discarded? — Django · 3742 10/13/20
Since the card says to replace the bless tokens with "an equal number of [curse] tokens", I think that you're supposed to remove the bless tokens first, then put in X tokens, where X = number of bless tokens removed. With this interpretation, you'd remove the 5 excess bless tokens. — TheDoc37 · 455 10/13/20
We need an official ruling on this, because "replace" is defined as "take the place of", and it doesn't make sense to me that you can "replace" a token if there's nothing to put in its place. — adran06 · 12 1/6/21
This card acquires a whole new potential now that "Hallow" was released. You could potentially turn 10 curse tokens into bless tokens and then remove them all with Hallow and remove a Doom token as well in the process. It would still be quite costly though. — Killbray · 72 1/16/21
I'm not seeing anything when I search for "Hallow" on this lovely page. I'm guessing it's a new card that's been spoiled but not officially released, or maybe the website's database hasn't been fully updated yet? — fractalhack · 2 2/22/21
I'm running this in a Mateo deck together with "A Watchful Peace" and it's crazy good to clear curses while skipping encounter cards — pewpew · 25 5/21/21