When 1 or more tokens would be removed from the chaos bag during a skill test: Seal them on Nephthys, instead.

Anna Christenson
The Lair of Dagon #262. 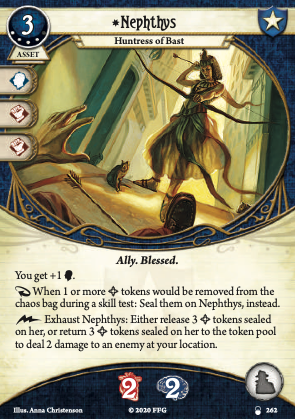 If you’re wondering why Sister Mary is in Guardian, this is why. Passive enemy extinction. Even in a fast game, Sister Mary will add 12 to 17 tokens to the bag just by existing. And until you have allies like Nephthys or a covenant, you’re going to cringe anytime someone draws a double bless. (Unless you have blessing of Isis.*)

Now, you want your allies to draw blesses! It lets you explode enemies, even more effectively than guard dog(2). +1Will is OK, and you could even teamwork this ally to a mystic, because it doesn’t matter where the Blessed tokens come from as long as they get used. There is another combo with this. Holy rosary (2) wants you to pass every willpower check you get. Bast’s faithful helps out. You handle this, first watch, and I'll Handle This! allows you to cycle tokens through the bag even faster. Enchanted weapon also wants your willpower to be increased. There’s plenty to elevate Mary even without spells.

At 4XP, Nephthys is extremely expensive for an ally. Cycle hard, get her out early, and melt foes. Neph is best (Bast?) at high player counts, where blessings will be drawn continually.

*It’s worth noting that there’s an anti-synergy between this card and blessing of Isis. Nephthys wants tokens taken out of the bag. Isis keeps them in there, and if you’re Mary increases them. You could take both, and on a larger team someone could take the other. But they go in different directions, so don’t spend your XP on both at once.

MrGoldbee · 1218
Great review. One thing I might argue is I don't think that the anti-synergy between BoI and Neph is that strong. Yes, if you trigger BoI, the tokens go back into the bag, but Neph catches so many singletons that you can recycle right back into the bag that she can be a huge boon for BoI. Even if you choose to burn the bless tokens to deal damage, you've already drawn them, so BoI hasn't lost its potential to capitalize on them the way it does when burning tokens using Radiant Smite or sealing them on Shield of Faith or RoS. — Sandmole · 22 3/24/21
I don't agree about avoiding to have bothe Nephthys and Blessing of Isis : if someone at your location reveals 2 blessed tokens you exhaust the Blessing and return them, if someone anywhere needs a part but not all the blessed tokens revealed you exhaust the Covenant and put back in the bag what you don't need ... and for all the other situations Nephthys can hold them until you decide if you need to spend them or if you want to put them back in the bag.<br>Nephthys not exhausting to seal the the tokens is amazing ! — AlexP · 195 3/30/21
1

Dealing 2 damage (to an elite or foe engaged with ally) as a free action is very powerful!

I'm looking at this as a fun new ally for Leo Anderson to build around! Earlier Leo got Priest of Two Faiths to add free tokens. With [Tempt Fate] you can add a lot of tokens quickly.

Unclear why someone would not always want them to release them back into the chaos bag. This cycles the tokens so you can seal them back on her later.

Calprinicus · 3507
"Confused on this wording:..." Either you release the token to the chaos bag, or you return them to deal 2 damage. — madcircus · 80 1/21/21
They are two separate actions you can perform. You can exhaust her to just release 3 and add them to the bag, or you can send 3 from her to the token pool to deal damage. This essentially means you get twice as much use out of every bless token, if you choose to return them to the bag each time. — Jaysaber · 6 2/15/21
0

Something unexpected happened when playing this card with Sister Mary in a 2 investigator team. We had all 10 bless tokens in the chaos token bag/sealed within a few turns of starting the game, thanks in part to a Keep Faith and a few activations of Blessed Blade. Then, with Nephthys down, there were no bless tokens in the token pool for the rest of the game, so I could not activate my Holy Rosary (2) and Sister Mary's end of the round power didn't do anything. I should probably just feel thankful that Nephthys was working full power, but this made me realize that Nephthys is probably even more helpful if you want to "go blessed" with an investigator that doesn't have Mary's built in power, since she (Nephthys) traps the bless tokens forever as long as she is in play, which greatly enables bless-related effects. At the least, I would probably forego most of the cards that add/save bless tokens to the bag if you choose Nephthys, because it can become redundant pretty fast.