Attach to a Weapon asset controlled by an investigator at your location. Limit 1 per asset.

Attached asset gains the Relic trait and takes up an arcane slot in addition to its other slots.

When you perform a Fight action using attached asset, exhaust this card: Add the owner of this card's to your for this attack. This attack deals +1 damage.

Sarah Lindstrom
The Lair of Dagon #261. 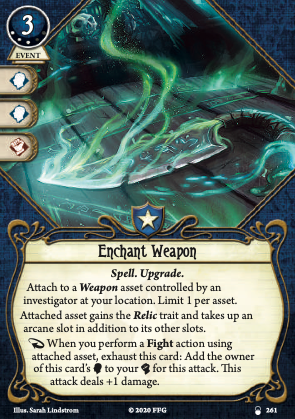 Hey, it looks like Mary's weapon was in fact a 2-piece kit !

I mean since the beginning it was weird for Blessed Blade NOT to have the Relic trait and now it's done. Plus it gives Mary the possibility to have a potential once per turn 3 damages attack almost always successful.

I assume this card will also be helpful for decks with a 2-handed primary weapon which can have simultaneously this primary weapon and a secondary one to deal with Poltergeist, Wraith, ... Now Mark Harrigan can burn all the Wraith he encounters with his Relic Flamethrower with no fear of seeing them raising again due to their haunted effect. Plus once per turn he can perform an attack with a skill of ... 13 !

You can also play it on a Sawed-Off Shotgun used by a rogue (ideally Tony Morgan). The added willpower is only 2 but you can increase that dependant on who played Enchant weapon on the Shotgun (4 - 5 I assume) and you still have the +1 damage.

And last thing I have for now: as you add 2 skills you could as well increase both, right ? For example making your new Relic Reliable or committing Steadfast (if you need Tony to succeed by 6).

AlexP · 198
Its the owners willpower not the controllers, so tony would get whoever put it on him as a boost, that could easily be +5. — Zerogrim · 241 3/30/21
Oops, fixed. — AlexP · 198 3/30/21
Committing steadfast only gives max +3 as well, only matching icons are counted on committed skills, the fact that you add heads doesn't change the fact that it's a first check. Reliable works though, and in class, so nice thought — NarkasisBroon · 9 3/30/21
The fact that the enchantment's power depends on its owner makes this an interesting support option as well. It's level 3 so generally only actual Guardians can run it (notable exception: Parallel Agnes Baker), but Mary could run 2 for reliability and still make use of the second when it shows up, for instance. — Thatwasademo · 42 3/30/21
Marie Lambeau can also use this card to support her group. — Tharzax · 1 3/30/21
Add to .25 auto. Free attack on dodge at +6 plus fists. — MrGoldbee · 1233 3/30/21
I am confused, its a 3xp asset, which really limits it to people with spells as an option or guardians. how would a rogue get it? — brkndevil · 1 4/4/21
@brkndevil: You can play it on any investigator's weapon, so you could have e.g. Marie bring it and attach it to Tony's Switchblade or whatever. — Zinjanthropus · 205 4/4/21
If Player A puts it on Player B's weapon, Player A still controls the Event right? Since the reaction says "When YOU perform a fight" (i.e. YOU = the controller of Enchant Weapon), won't Player B not actually be able to trigger the reaction since they do not control the upgrade itself, even though they control the weapon? — slyguavas · 38 6/3/21
Nevermind, read the rules on Ownership and Control, makes sense. — slyguavas · 38 6/3/21
4

One of my favourite new cards, especially useful on high difficulty where test difficulty can get wild.

TL:DR. The straight up 1/turn accuracy boost can be phenomenal and the damage boost is far from shabby.

So, delving into it a bit, 3 cost for a card that is supposed to deal damage, but is'nt actually a usable weapon in of itself, that's steep! There is a lot of opportunity cost here, the two willpower pips make it bearable as a dud because at least it can shield you from treacheries. Also there is the fact that a second copy is, probably, a dud, if you get into the spot where you're equiped with one ecnhanted weapon in each hand youre officially in "win-more" mode.

So, now that I've established that Enchant Weapon is rather bad in vacuum, lets see what good it does. What you get depends on what you've enchanted.

With an inaccurate weapon, .32 Colt or Knuckleduster for example, this thing bridges the gap quite a bit, land the hits, keep moving forward.

With an infinite use weapon like Machete you'll really be able to just keep going and going and going. Commit the Enchant Weapon on your first attack to land one hit, commic a skill card for the second, efficiency!

With a weapon with undependable damage or limited charges, you can nail exactly the damage you need on a case by case basis, killing a 3-health enemy with one .45 Automatic shot, or saving your Enchanted Blade charges against 2 health foes and retaining access to 2 damage hits once the charges run out, or guaranteeing the kill with a Blessed Blade when you're not willing to risk fishing for a . Pump a Lightning Gun to 4 damage and blitz some monsters!

Usually when you're adding to stuff, you'll only want those cards for the characters with literally maximum , but the multifaceted benefits of Enchant Weapon mean that characters with middling can give this card a fair try, a roundly +3 to fight for Roland Banks or Mark Harrigan, a Becky centric Tommy deck will really love it.

Obviously, a higher makes it a little bit better, Sister Mary becomes a reliable hitter with this in play, with card's like Physical Training to back her deck up you can get a rather dependable Mary combat build once set up.

Finally if you're building a straight up support character, an Enchant Weapon can be played for firendly characters too, Carolyn Fern can pack this and use it to pull out a roundly 3 damage hit with a pistol, or play it on behalf of someone else.

All in all, I think Enchant Weapon is going to be a relatively common upgrade among character's henceforth, and once in a blue moon you might encounter a Paralell Agnes Baker doing something weird.

I'm loving this upgrade on Survival Knife (2), which allows you to fight and deal damage as a during the Enemy Phase BEFORE the enemy can damage you. That attack with this upgrade becomes ( + +2) and deals 3 damage (or more with Vicious Blow or Vicious Blow (2)).

Use your last action to move into a location with an enemy (or one location away from an enemy with Hunter) and deal at least 3 damage to that enemy when it attacks, which may kill it before it gets to damage you.

DrMChristopher · 129
The survival knife Reaktion is not a Fight *action*, is it? So it should only work with the basic attack? — trazoM · 9 8/6/21
Due to the bolt printed word fight in the description of the knife, the attack is a fight action (you just pay no action). So enchant weapon will work with the knife during the enemy-phase — Tharzax · 1 8/6/21
Enchant Weapon has done a lot to make low level weapon builds, which I already liked, incredibly viable. I usually just load up on Survival Knife 2 and maybe another level 2 gun or something, and do just fine. That said, Enchant weapon on holy spear can completely destroy final scenarios. — SSW · 168 8/6/21
Fun with sig weapons too. — MrGoldbee · 1233 8/6/21
Enchant Weapon does not work with the reaction ability, it's not a fight action. Compare with something like Marksmanship, that triggers off of any fight ability. — toastsushi · 62 8/8/21
So apparently a Fight-action designator does not indicate that something is a Fight action, but only a Fight-ability. Otherwise Frozen in Fear would make you pay an action if you used Shortcut(2) during your turn. — trazoM · 9 8/8/21
I've just looked in the rules and the fight action is clearly described as the usual fight. So using enchant weapon on the reaction is for me totally OK. (and you loose an action if you use shortcut as the first action with frozen in fear) — Tharzax · 1 8/8/21
You don't do that with Shortcut either. Frozen in Fear only affects move, fight, or evade actions, and Shortcut does not spend an action to use. — toastsushi · 62 8/8/21
But the action is in my opinion just a part of the costs, so if you don't need to pay it and you go through the steps you still perform the action — Tharzax · 1 8/9/21
You aren’t performing an action though, you are resolving an ability. You are ‘fighting/attacking’ (for things that care about it) but you aren’t taking a ‘fight action’. — Death by Chocolate · 1131 8/10/21
There’s definitely uncertainty around action designators and their effect on non-action abilities, and I hope an FAQ will weigh in on that soon because it’s a common issue, and I could see a strong argument for either side. — Death by Chocolate · 1131 8/10/21
1

How about compiling it with Enchanted Blade?

Does it then take 2 Arcane Slots?

Because that would also be an amazing combo for any guardian that would like to choose exactly how many damages to give...

Valentin1331 · 10370
I believe it does, as it says "in addition to" the other slots. — StyxTBeuford · 12693 6/8/21
Yes it does because of what Styx mentioned. Although it may not always be a bad thing since the new cycle has hinted at combinations and rewards for cards while you have certain types of card types in play, arcane included. — LaRoix · 1574 6/9/21
Another question: When it says exhaust _this_ card, does it refers to the Asset it is attached to or does it refer to Enchant Weapon? The first situation would mean that Galvanize can be used to take even more benefits of this amazing card. — Valentin1331 · 10370 7/24/21
It should just exhaust the enchantment and not the weapon by its wording — Tharzax · 1 8/11/21
However, you can't Galvanize the Enchant Weapon because it's an Event not an Asset :( — slyguavas · 38 11/11/21
1

I had no idea how 'enchant weapon' works with Enchanted Bow or other willpower-weapons, so I asked FFG. This is the response I got:

This is not at all what I expected. It seemed like these two would have a really cool synergy, but instead, it turns out it's just a very expensive way to do 1 extra damage.

Achire · 251
I mean... while this may be disappointing, it shouldn't be unexpected. This is what the card says it does. it adds your willpower to your combat - not to the skill value for the test. — Death by Chocolate · 1131 5/11/22
But the additional damage will help to kill 4 hp enemies without taking a AoO. Might be a good option for the second card if your guardian already got the first for himself. — Tharzax · 1 5/12/22
I think it is antithetical to the intent of the card to not have it boost the bow. “Skill value” would’ve been a better choice but I suspect FFG didn’t think of it at the time but doesn’t want to revise every card just to make them all work with each other. On the other hand, +1 only might create some interesting considerations? — LaRoix · 1574 5/14/22
Personally, I find it flavorfully consistent that putting an enchantment on an already-enchanted weapon does... very little. — Hylianpuffball · 20 5/15/22
0

Would Nathaniel Cho get to add another +1 to this card since it is "damage from an event card"?

mgorka · 1
Grenade Sez: Any additional damage is dealt to the attacked enemy. — MrGoldbee · 1233 5/22/22
Also, Enchant Weapon isn't dealing the damage, it's modifying the fight action on the weapon, which presumably doesn't count as the event dealing the damage for similar reasons to why his ability needs to say "or a fight ability on an event". But since the fight action in this case is on the Weapon asset, it doesn't meet the second clause either. — Thatwasademo · 42 5/22/22
Far more importantly, though, as MrGoldbee said, the Grenades, like any other single fight ability that deals damage to multiple enemies, specifies what happens with additional damage and it's not dealing that additional damage to everything. — Thatwasademo · 42 5/22/22
Of course the additional damage is the attacked enemy... I can't believe my oversight. Thanks. Also thanks on the nuance of +1 being a bolster to the weapon and not damage being dealt from the event. Presumably that would apply to a card like Marksmanship as well. — mgorka · 1 5/29/22