Knight of Swords
Charge Ever Onward

When you would succeed at a skill test: You get +1 skill value for this test. You may discard Knight of Swords to get +3 instead.

When the game begins, if Knight of Swords is in your opening hand: Put it into play. 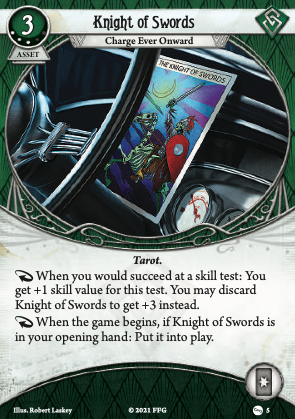 TL;DR: Very situational card, only for rogues that use and skills and with a good amount of "succeed by X" triggers.

Let's compare it to the other Rogue Tarot card as they compete for the same slot: The Moon • XVIII

The Moon • XVIII gives you a solid +1 for 3 resources and 1xp, with no competition to other slots.

Knight of Swords now, gives +1 on any skill, IF you succeeded, therefore:

compared to The Moon • XVIII and any other tarot, Knight of Swords doesn't help you to succeed your test in the first place.

Knight of Swords can be used for any test, so more aimed at Rogues that would use at least 2 different skills with "succeed by" triggers, as of now, mostly and skills.

I am not going to do a list of every single combination, but a selection of some interesting that came to my mind:

Beretta M1918, Mauser C96 to prevent exhaustion or trigger extra effect if it is your last action

.41 Derringer for an extra action that you could cash in with Pay Day

Not a weapon, but it helps you to keep your Lockpicks/Lockpicks or Suggestion in the game.

Completely prevents bad stuff happening with the new set of assets in Edge of the earth: Blur/Divination or the fight one to be revealed soon.

Help triggering the side effects of: Breaking and Entering, Slip Away, Cheap Shot

Help recuring in your hand the upgraded: Slip Away, Cheap Shot, Backstab, Pilfer

Improves the payback of: "Watch this!", All In, Nimble and Momentum

If you plan to use the "succeed by/succeeded by" mechanism AND would like to use multiple skills (/ based on the cards we can see in the selection that use this mechanism as of the release of this box), then Knight of Swords could be a good pick, otherwise select a lvl 1 tarot card that also help you succeeding the test.

Could be useful for "Skids" O'Toole or why not Tony Morgan that doesn't have access to Ace of Swords, Winifred Habbamock that wouldn't take Sharpshooter, maybe...

Let's bet here that the new Rogue to come will be a reversed Stella Clark? Succeed by 3 or more and get an extra action? In this case this card could become a stappler.

Valentin1331 · 25004
I agree with your analysis. A standard chaos bag has an expected value of -1.5 or so. So now you can commit one card less. I would like this more if it was exhaust to add +2. Of course, I would sell my mother for a level 5 version that provides a +2 on a success (again even if it has to exhaust). — togetic271 · 3 6/28/21
Then try to use Opportunist x2 with Knight of Sword, as well as Daredevil to find your opportunist fast enough, and even if rogues like money, keep your mom, she probably still has a lot of love to give :) — Valentin1331 · 25004 6/28/21
You can always put down two copies of this, if you are fine with going the Anna Kaslow or Moon pendant route (which in turn will probably need Charisma or Relic Hunter). It's very xp intensive, but you are always succeeding by two so you can safely commit your upgraded Opportunists and enjoy the maximum effect out of all of your succeed by cards. — Gandalph · 33 7/4/21
For any test that uses or includes Agility, though, Moon is going to be just as good as Knight. There's no point in switching from Moon to Knight just to try to land Cheap Shots unless you're willing to discard Knight for the one-use +3. — OrionJA · 1 9/21/21