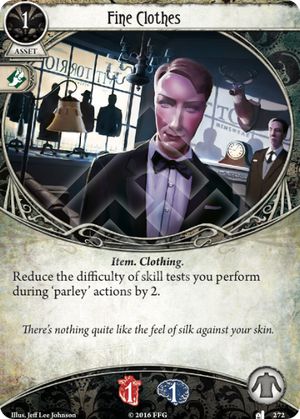 I can't offer a purely statistical justification for this card. It's hard to make a case for it in a generic deck. And yet... it will win you scenarios. It is the Robert Horry of cards -- mediocre numbers, magical late-game performance. I am almost positive that there will be a time in your campaign, if you start with this card, when you will fall in love with it. Recruiting Randolph Carter, coaxing Peter Clover out of the club, mollifying the suspicious Josef Meiger -- these are the tests that having you digging around for five minutes in the chaos bag because you're so terrified about what you might pull out. Maybe there are monsters bearing down on you. Maybe the chaos clock is about to strike 12. Maybe your interlocutor is programmed to jump you if you fail the check. You just know you can't fail. And if you have your Fine Clothes on, you probably won't. It seems like an absurdly situational card, because the tests it deals with (for the most part) are located on unique enemies or locations or other scenario cards -- the sorts of things you don't think much about when designing a general, all-purpose deck. Nevertheless, Parley actions are actually reasonably common, as previous reviewers have pointed out, and when they show up, you often HAVE to pass them to proceed. It's not like cluevering or dealing with monsters, where you often have a range of options. Partly for this reason, Parley actions tend to be some of the most consequential in the game. And their corresponding skill checks -- nasty indeed! All the more so because you tend to make them late in scenarios, when the ugly tokens (I'm looking at you, skull!) have gotten even uglier. Who cares if Fine Clothes does nothing but soak a bit of damage for three scenarios in a row? In the fourth, it's going to be the difference between ekeing out a win that you replay in your head for days, or pulling the -3 and staring at in your palm for days.

Mordenlordgrandison · 317
I think including Fine Clothes as a one of in any solo deck is usually a good call. In fact at any player count if you can draw/search your deck well enough, Fine Clothes becomes an amazing card. Essential for toolbox decks imo because yeah, Parleys are common enough. I find myself taking this more and Leather Coat less these days. — StyxTBeuford · 12504 1/3/20
I don't think there's a more perfect card for Adaptable in the game :) — bee123 · 24 1/4/20
5

Okay, the Parley bit is interesting ... but - just how many Parley actions are there in the game so far? Not many, so let's ignore that...

1 cost for 1 health and 1 horror. And it's an Item, so Scavenging might work well with it. Also, it's the first body slot card to offer some level of horror protection, which is interesting too.

On balance, it's probably not as good as Leather Coat, but it's not disappointing for the cost, and I find horror is often more of a problem than health. It's also much cheaper than Bulletproof Vest in terms of XP.

I could imagine using this with a Rex Murphy Scavenging build, or perhaps Jim Culver Scavenging with the right ally cards.

One down-side - this has the creepiest card art in the game. Is that a mannequin? Scary.

AndyB · 865
Is really good for Carnevale of Horrors so far — jd9000 · 54 7/8/17
In the first two Dunwich scenarios the parley checks are kind-of important, so I tent to put Fine Clothes into deck with the intent to replace it later. — Magnificate · 1000 7/8/17
*Minor spoiler ahead:* In certrain scenario's where you encounter nasty treacheries that make you discard assets in play, this little neutral card i great as asset discard fodder. You're gonna cry when that treachery comes up after you just put your lightning gun as only asset into play — Heyenzzz · 3765 8/18/17
As of the release of Path to Carcossa, 8 of the 15 existing scenarios have a parley action on at least one card, and most of those require skill checks and have big payoffs. — Sechen · 52 10/9/17
Perfect for Eternal Slumber — ifergus · 1 1/8/19
Preston needs this, if only for the theming. — grenadillaGoat · 20 2/7/19
NIGHT OF THE ZEALOT *spoiler Alert* - does it work for those parley tests with the top cultists in Midnight Masks, please? — brennalex · 7 2/18/19
@brennalex *spoiler alert* Most of them don't actually involve tests, but a couple of the 'Return To' cultists are effected. Jeremiah's has a test, and Alma makes you draw encounter cards which may cause you to make skill tests nested within her Parley action. — Death by Chocolate · 836 9/4/20
2

Oof. What a card. Cripplingly over-specialized, and subpar soak and skill icons to boot. It is unlikely that you would seriously consider this card in a blind run of any campaign, and even on a re-run, you have so many more all-purpose options to deal with the enemies with parley actions.

...That being said, I am what you might call, a maniac who makes it his business to include EVERY card that exists in this game at least once in one deck or another, even the bad ones. And to my surprise, I have found a niche for Fine Clothes, in a Joe Diamond deck no less:

Astute players may realise where I'm coming from in volunterring Joe to include this sub-par card; it turns out that Fine Clothes synergises with exactly two cards in the game right now (as of The Search for Kadath): Persuasion and Interrogate. That's right, injecting parley actions into your deck provides insurance against the dead-draw nature of Fine Clothes in the wrong scenario, providing it with the opportunity to always be useful. Granted Persuasion and Interrogate aren't exactly great cards either, but their badness comes from a hard test to pass, rather than a mediocre effect. In that regard, Fine Clothes elevates them to a decent level of power, and Joe Diamond fits the bill for this combo, due to having both the ability to take both and cards, and a hefty 4 in both attributes, which combined with the reduction of difficulty that Fine Clothes provides, all but ensures the success of the parley tests.

That's not to say this is a good combo by any means. It is however a thought experiment in how to maximise the potential of Fine Clothes, and I don't think it gets better than that for our tuxedo wearing mannequin... save for one last possible combo; Adaptable. With Adaptable, and proper knowledge of the scenarios that you'll be facing, you can elect to include Fine Clothes on the missions where it's actually useful, and swap them out when they won't be. This absolves them of their downside of ultra-specialisation, and a -2 difficulty on tests that may be a major part of a mission can turn a scenario one difficulty down for all intents and purposes. As to which ones you should consider swapping in Fine Clothes for, that would be spoilers, so I leave it to you to imagine when dressing in your Sunday's best would be appropiate.

Lucaxiom · 2746
I feel like Fine Clothes is a bit better than you say. Most Parley tests are relatively high in difficulty, and having Fine Clothes can really speed up those tests. Certainly more useful in some campaigns than others though :). Moreover, if you are replaying a campaign and know that Parley tests are coming up, this card can compensate for certain low stats (especially Willpower). And it's especially useful for Rogues, who can swap them in/out of decks really easily with Adaptable to tech for certain scenarios. :) — iceysnowman · 150 11/28/19
I've really liked Fine Clothes. It's a solid filler for the coat slot if you have nothing else to take and you want more utility in your deck. The fact that it soaks horror is also not irrelevant for low sanity bois like Skids, Tony, or Roland. Tommy can keep it out and it'll never die to Rookie Mistake, always ready to reimburse its expense. Mandy can take one ofs for more narrow cards, especially at higher deck sizes (and her stats are good for Parleys anyway). And yeah, any Rogue with Adaptable can squeeze in a copy or two before certain scenarios. I think it serves a great purpose as a coat that anyone can take. It's specialized, but powerful and still versatile in its soak. It's also cheaper than Backpack and Trench Coat. — StyxTBeuford · 12504 11/28/19
While the soak is nice, there's many better cards. You also don't need to fill all slots — Django · 3616 11/29/19
You’re right, you dont need to fill slots. But as an all purpose cheap soak it’s pretty great, and the effect is still powerful and common enough that Ive never been upset for taking Fine Clothes. — StyxTBeuford · 12504 11/29/19
This card is way better than you give it credit for. In the sense that it's a silver bullet. It's outright fantastic in a few scenarios and for said scenarios a Rogue might Adabtable them in. — Tsuruki23 · 2038 12/3/19